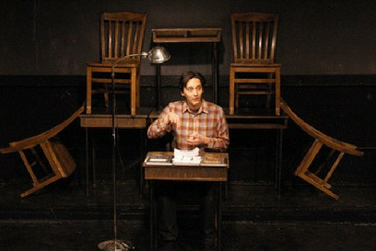 UMD students perform 30 two-minute plays they wrote themselves! Presented under the guidance of alumnus Kurt Chiang, and in partnership with UMD School of Theatre, Dance, and Performance Studies.

About Kurt Chiang (BA Theatre ’04)
Kurt Chiang is Artistic Director & Ensemble Member with The Neo-Futurists. As a Neo, he has written over 250 two-minute plays since joining the company in 2008, and is the creator of the Prime Time show Analog (2013).  Outside the Neos, he has read his work at various readings, including Paper Machete, Write Club, West Side School for the Desperate, The Marble Room, and Wit Rabbit. He originates from the Maryland/DC Metropolitan Area, and has lived in Chicago since 2005.

This event is part of NextNOW Fest 2018