I have been a jazz fan since the age of three when my father first played John Coltrane's "A Love Supreme" for me. I have enjoyed jazz performances all over the United States — at the Village Vanguard in New York City, the Kennedy Center in DC, the Spoleto festival in Charleston, SC and all over the Boston area at Sculler's, the Somerville Theater, the Hatch Shell and the Regatta Bar.

Seeing Holland live and meeting him were on my jazz "bucket list." Thanks to the Center, I can check that one off.

I have been sitting at my desk, neck straining toward the tasks piling up on my computer screen. My right shoulder is tight from unconsciously gripping the mouse and from the worries of the day. It’s 5:54pm and I need to leave in exactly six minutes to get to rehearsal on time. I scurry to gather my things, making a mental list of chores I can’t forget for tonight and tomorrow. Juggle, juggle, juggle —even all the way to the studio, through the evening traffic.

I join the other dancers and lay myself flat onto the studio’s hard and beautiful wooden floor. I close my eyes. This is a moment of true beauty.

I remember going to my first performance by the Oklahoma City Symphony Orchestra, followed by the opening night party. My godfather, Kenneth Ervin Kilgore, made this moment possible. It was one of the many ways he encouraged me to wonder and to be consciously apart of the larger creation.

We were all one that night, artists and spectators alike.

Sometime in my sophomore year at Kenyon College, 1967-68, the James Cotton Blues Band came to campus. Kenyon in those days was a men’s school and it was a dance weekend so there were women there but it was still mostly guys and I didn’t have a date. So I was unhappily unencumbered. I’ve always been good at getting near the stage at rock and pop music concerts, and I actually got up on the stage for that one.

I’m lying on the floor underneath the piano with the music all around me and looking over at James Cotton dancing that little two-step … and it was just really transforming.

A few years ago I had the opportunity to see Dan Hurlin’s Disfarmer at the Center. I had read about it beforehand, so I knew the story: the hermit photographer who managed to capture incredible images of the people he lived among, even though he was an outsider. I had gone to one of Dan Hurlin’s discussions before the performance so I understood about Mike Disfarmer’s background and what they were about to bring to me onstage.

…To actually see the story unfold through puppetry was amazing. I’ll never forget seeing the Disfarmer puppet get smaller as the production went on, shrinking down until he was nobody.

I have a plaque on my desk that says, “It’s kind of fun to do the impossible. – Walt Disney”

Ballet is the only art form I ever studied in which I didn’t dream of a career. I didn’t realize until I was an adult struggling through life as a theatre artist how much I appreciated having an art form that remained a hobby.

It…led to me going back onto pointe - for no reason other than proving to myself that I could.

Theater has the luxury of generating re-creations and interpretations of events and ideas plucked from all of history and from the imaginations of men and women. Fortunately, on extraordinary occasions, theater will create new history to be savored by history’s creators and those of us privileged to be present.

The history generated that evening may have begun within our group in the Clarice Smith Center, but one cannot tell where it has gone from there.

I spent my last semester abroad in London, which was fantastic and I was able to do it partially because I had received a scholarship from the donors at the Clarice Smith Center.

The best part was seeing that there is an audience for the kind of theater I want to do. 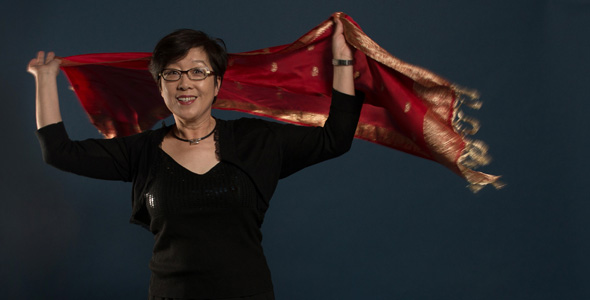 As a costume designer who emigrated from China to the United States, I always find a personal connection with plays in which the protagonist is searching for his or her place in the world.

…this play changed my perspective on the meaning of home…

Last May I embarked on an international journey that opened my eyes to a new culture when, along with a few designers and UMD theatre faculty, I had the amazing opportunity to visit Beijing.

…I learned the importance of expression and the simplicity of line.