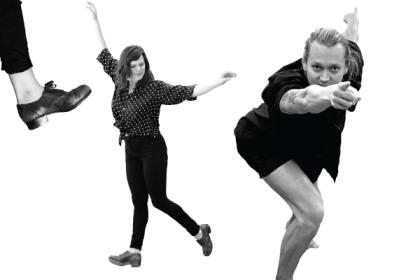 Driven by curiosity, ongoingness and experimentation, Hill devises a sonic landscape that breaks the boundaries between music and dance. Bodies become instruments and intricate choreographies yield sound in a piece that highlights the value of community. Six percussive dancers and two musicians investigate the translation process prevalent in Appalachian old-time music to unearth experimentation tethered to tradition.

Finally, Fairies! is a choreography: an unruly maze of embodied archaeologies, hauntologies and compositions that draw inspiration from Vaporwave and the writings of Jacques Derrida and Mark Fisher. Six performers explore aesthetic gesture and capitalist realism through encounters with specters and revenants. This devised work, decidedly unsettled, presents a landscape of precarious connections and unstable meanings that fade as quickly as they appear.

Concessions:
The Clarice lobby concession bar Encore will be open for food and beverage sales during the Friday, March 11th performance. It will not be open on Saturday, March 12th or Sunday, March 13th.

Choreographer’s Note for LOST PATTERNS
Lost Patterns is a percussive dance work that explores translation to reimagine tradition. In collaboration with dancers and musicians, we devise a sonic landscape that investigates the translation process within Appalachian old-time music to find avenues for experimentation tethered to tradition. Several crooked Appalachian tunes are translated onto the body through melodic replication, improvisation and digital abstraction, composing a world of sound that invites the audience to listen to the body speak. Lost Patterns celebrates percussive dance's ability to be both visual and sonic and believes in the power of collaboration and community to ignite possibility. Lost Patterns primarily uses footwork from both tap and flatfooting, acknowledging the legacy of those dance forms and honoring the tradition bearers who paved the way.
Acknowledgements for LOST PATTERNS
I want to thank my cast and design team: Roxy King, Gerson Lanza, Ashton Frech, Paetyn Lewis, Tiffany Ospino, Daniel Coolik, Erik Spangler, Andrés Poch, Becca Janey, Heather Reynolds and Kira Peck for showing up as their vibrant selves and contributing who they are into this project. You trusted my creative process, even when I brought a banjo into the space, and you leaned into the journey of making this show. I especially want to thank Roxy King and Gerson Lanza for their feedback, camaraderie and footwork and Erik Spangler for the gentle nudge towards experimentation. To my supportive committee members Sara Pearson, Sam Crawford, Alvin Mayes and Patrik Widrig, as well as my M.F.A. cohort, Kate Spanos and Maggie Laszewski—thank you all for encouraging me to boldly embrace this vision. To my mentors and friends within the old-time music community; thank you for being my people and the inspiration for this show. Lastly to my parents and close friends, thanks for letting me process my graduate school experience with all of you. I appreciate you all so much!
--REBECCA HILL, choreographer
Choreographer’s Note for FINALLY, FAIRIES!
“Each time it is the event itself, a first time is a last time. Altogether other. Staging for the end of history. Let us call it a Hauntology.”
--Jacques Derrida
Finally, Fairies! is a choreography: an unruly maze of embodied archaeologies, hauntologies and compositions. The raw material for the work was almost entirely sampled from a filmed improvisation, Solo 2009, which I created over a dozen years ago. A revenant, Solo 2009 exposed moods, affects and memories that drifted through the air while the cast and I explored aesthetic gestures of Vaporwave and semiotic ambivalence.
Each performance of Finally, Fairies! invites new moments of compositional alignment and misalignment, suggesting embodied memory as hazy and inconclusive. Said another way, this work presents a decidedly unsettled hypnogogic landscape of movement, connections, poetic sensibilities and unstable meanings that fade as quickly as they appear.
I am especially grateful to my cast of performers, design team, composer, teachers and mentors, all of whom met me so generously in the creation of this work. Additionally, I thank every person with whom I’ve shared artistic process: this work made me ever more aware that your creative impulses live on in my compositions.
--TRISTAN KOEPKE, choreographer