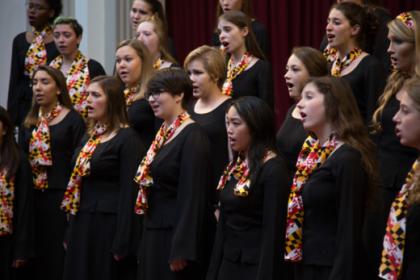 Please note: The livestream for this performance will only be available live. The stream will not be available to view afterwards.

Embark on an exciting exploration of the breadth and depth of music history’s most enchanting choral literature. As a special treat, the University Chorale performs John Corigliano’s Fern Hill with strings, harp and piano.

Led by Edward Maclary, the choral ensembles have achieved international renown and offer a wide array of experiences with music encompassing all styles and eras. In addition to this season’s on campus performances, the UMD Concert Choir participates in annual collaborations with both the National Symphony Orchestra and the Baltimore Symphony Orchestra.

PROGRAM MENU: PROGRAM • PROGRAM NOTES
View Program PDF.
PROGRAM
UMD Men’s Chorus
Nathan Lofton, conductor
The Stars are with the Voyager
Eleanor Daley (b. 1955)
Agnus Dei from Mass for Three Voices
William Byrd (1543–1623)
The Ballad of Little Musgrave and Lady Barnard
Benjamin Britten (1913–1976)
Lullabye (Goodnight, My Angel)
Billy Joel (b. 1949)
INTERMISSION
UMD Treble Choir
Kenneth Elpus, conductor
Jonathan King, assistant conductor
Dixit Dominus
Baldassare Galuppi (1706–1785)
I. Dixit Dominus
II. Juravit Dominus
III. Judicabit in nationibus
Jonathan Toomer, violin
Anna Kelleher, violin
William Gu, viola
Sam Lam, cello
Asa Dawson, double bass
Theodore Guerrant, organ
Lauda Sion
György Orban (b. 1947)
Choral Hymns from the Rig Veda
Gustav Holst (1874–1934)
Third Group
I. Hymn to the Dawn
II. Hymn to the Waters
TāReKiṬa
Reena Esmail (b. 1983)
Untraveled Worlds
Paul Halley (b. 1952)
Clare Hofheinz, violin
Jesse Florida, percussion
University Chorale
Matthew Goinz and Mark Helms, conductors
Laudate Jehovam, omnes gentes
Georg Philipp Telemann (1681–1767)
Anna Luebke and Jonathan Toomer, violin
Katie McCarthy, cello
Monica Tang, organ
Flower of Beauty
John Clements (1910–1986)
Dieu! qu’il la fait bon regarder
Claude Debussy (1862–1918)
My Spirit Sang All Day
Gerald Finzi (1901–1956)
Fern Hill
John Corigliano (b. 1938)
Jessica Harika, mezzo-soprano
Anna Luebke, concertmaster
Jonathan Toomer, Anna Kelleher, and Joanna Choi, violin
Seth Goodman and William Gu, viola
Katie McCarthy and Samuel Lam, cello
Asa Dawson, bass
Lauren Twombly, harp
Monica Tang, piano
Combined Ensembles
Mark Helms, conductor
How Can I Keep from Singing?
arr. S. Quartel (b. 1982)
PROGRAM NOTES
The UMD Men’s Chorus presents a program about storytelling. The centerpiece of our program is Benjamin Britten’s 1943 setting of The Ballad of Little Musgrave and Lady Barnard, an Elizabethan story of secret love, jealousy, and murder. Britten’s work is bookended by two short pieces from different centuries that offer space for reflection: the Agnus Dei from William Byrd’s 1595 Mass for Three Voices, and a King’s Singers arrangement of Billy Joel’s 1993 hit Lullabye (Goodnight, My Angel). Our program opens with a 2002 composition by the Canadian composer Eleanor Daley, The Stars are with the Voyager.
The UMD Treble Choir set pairs old and new works based on similar themes and inspirations. Galuppi's Dixit Dominus is one of more than twenty extant choral works the composer wrote for the girls at the music conservatory of the Ospedale degli Incurabili in Venice, a hospital originally founded in the sixteenth century to care for the ill, destitute, orphans, and girls with no dowry. This particular work fell mostly to obscurity until this modern performing edition was published by musicologist David Larson. It is paired here with contemporary Hungarian composer Gyorgy Orbàn's Lauda Sion, a quick work in Orbàn's characteristic style of combining short rhythmic bursts layered under longer phrases. Holst's Choral Hymns from the Rig Veda were inspired by his own 1907 purchase of a copy of the second edition of Ralph Thomas Hotchkin Griffith’s translation from the original Sanskrit. Well-regarded in the choral canon, the works are nonetheless a product of British colonialism. They are paired here with contemporary Indian-American composer Reena Esmail's TārekiTa, a work comprising vocables made to imitate the sounds of traditional Indian classical instruments. Our final work, Untraveled Worlds, pairs a portion of Alfred, Lord Tennyson's epic poem Ulysses with the contemporary compositional style of Paul Halley, whose works for treble choir use folk and pop inspirations.
The University Chorale’s unaccompanied songs express the beauty one finds through love. In Flower of Beauty, a young person reflects on their betrothed, comparing her favorably with many aspects of beauty one finds in nature. In Dieu! qu’il la fait bon regarder, Debussy sets a fifteenth-century French poem that speaks of the beauty of a young woman whose perfection cannot be matched on either side of the sea. Finally, My Spirit Sang All Day is an ecstatic celebration of the joy one finds in love. The fact that this setting was composed around the time of the composer’s marriage to his wife Joyce (or “Joy”) brings a new layer of meaning to the text by poet Robert Bridges.
“I first encountered Dylan Thomas’ work in 1959, my last undergraduate year at Columbia College. It was a revelation. Both the sound and structures of Thomas’s words were astonishingly musical. Not by accident, either: ‘What the words meant was of secondary importance; what matters was the sound of them...these words were as the notes of bells, the sounds of musical instruments,’ he wrote in his Poetic Manifesto of 1951. I was irresistibly drawn to translate his music into mine. One poem captivated me: Fern Hill, about the poet’s ‘young and easy’ summers at his family’s farm of the same name. I wanted to write this work as a gift for my high-school music teacher, Mrs. Bella Tillis, who first encouraged my musical ambitions. She introduced Fern Hill with piano accompanying her (and, once, my) school choir.
Fern Hill is a blithe poem, yet touched by darkness; time finally holds the poet ‘green and dying,’ but the poem itself, formally just an ABA song extended into a wide arch, sings joyously of youth and its keen perceptions. I set it for mezzo-soprano solo, chorus, and orchestra, aiming to match the forthright lyricism of the text. (The direction ‘with simplicity’ is everywhere in the printed score.)” — John Corigliano
Archived Event