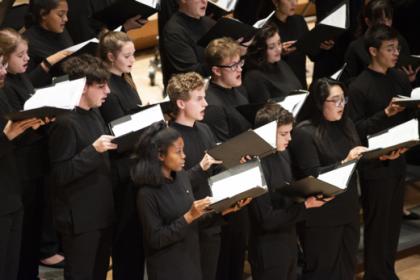 Often known as a Requiem for the living, Brahms’ masterpiece has touched concertgoers for over 150 years. In Comfort & Embrace, the UMD Chamber Singers join forces with the Washington, D.C.-based professional choir The Thirteen to remake this beloved work into a fully staged theatrical production designed to move each and every member of the audience. This production will feature the audience interspersed among the performers, creating a new relationship between audience, musicians and this touching work. Featuring exceptional pianists Derrick Goff and Rachelle Jonck, this production will be performed with its original and intimate orchestration—piano for four hands.

About his Ein Deutsches Requiem Brahms wrote: “as regards the text, I must confess that I would gladly leave off the ‘German’ and replace it simply with ‘human.’” Join the UMD Chamber Singers and The Thirteen for this concert which explores human connection.

UMD Chamber Singers:
Led by Edward Maclary, the UMD Chamber Singers have achieved international renown and offer a wide array of experiences with music encompassing all styles and eras. The ensemble has appeared by invitation at major professional music conferences and won top prizes at international choral competitions. Alumni from its ranks are now singing and conducting professionally throughout the United States.

The Thirteen:
Praised for performing with “striking color and richness” (The Washington Post) and “a tight and attractive vocal blend and excellent choral discipline” (American Record Guide), The Thirteen is an all-star professional ensemble known for reimagining the potential of vocal music. Since its founding in 2012, the choir has been at the forefront of invigorating performances of choral masterworks ranging from early chant to world premieres and the centuries in between.

PROGRAM MENU: PROGRAM • ABOUT THE PROGRAM • ABOUT THE ARTISTS
View Program PDF.
PROGRAM
Ein Deutsches Requiem (Op. 45), Johannes Brahms (1833–1897)
i. Chor: Selig sind, die da Leid tragen
ii. Chor: Denn alles Fleisch, es ist wie Gras
iii. Bariton und Chor: Herr, lehre doch mich
iv. Chor: Wie Lieblich sind deine Wohnungen
v. Soprano und Chor: Ihr habt nun traurigkeit
vi. Bariton und Chor: Denn wir haben hie keine bleibende Statt
vii. Chor: Selig sind die Toten
ABOUT THE PROGRAM
While it is not clear exactly when Johannes Brahms began composing Ein Deutsches Requiem, we know that he took considerable time to complete it. He may have first conceived of a large-
scale work about mortality in 1856 upon the death of his close friend and mentor Robert
Schumann. After Schumann’s death, Brahms moved to Düsseldorf to help his close friend’s
widow Clara with their children and household affairs. Their continued friendship afforded
Brahms access to Robert’s diaries in the years following his death, and he would later discover
that Schumann himself had planned to write a “German Requiem.” The second movement of
the Requiem includes material taken from sketches as early as 1854 (portions of which would
later become the first movement of the first piano concerto).
In 1861, while in Hamburg, Brahms began work on the first and second movements. Following
the death of his mother in 1865, he extended them both and began working in earnest on
movements III, IV, VI, and VII. During this time, Brahms composed without a commission,
deadline, or a benefactor funding his work, but worked simply out of expressive necessity in the
wake of these personal tragedies.
The first three movements of the Requiem were first performed in Vienna in December 1867.
The partial premiere was met with jeers from the audience, largely due to a misunderstanding
in the timpanist’s score, who played the pedal D in the third movement fugue so loudly that it
drowned out everything else! A version of the work without the fifth movement was performed
at the Catholic cathedral in Bremen in 1868 to great success, marking the first real public
triumph for Brahms in his lifetime. The complete work including the fifth movement then
received its first performance in 1869 in Leipzig, again to great acclaim.
The Requiem takes on a uniquely humanist form in Brahms’ hand, as he forgoes the practice of
setting the traditional Catholic liturgical texts and instead utilizes texts from scripture that he
himself chose. While unusual, this choice was not without precedent, particularly for a German
composer. Martin Luther had abolished the Catholic Requiem Mass during the Reformation, so
that notable German composers were accustomed to composing funeral music utilizing other
texts. Consider, for instance, Heinrich Schütz’s Musikalische Exequien, a major work written for
a state funeral, or BWV 82 (Ich habe genug) of J.S. Bach, a cantata written for the Feast of the
Purification, commemorating the death of the biblical figure Simeon. While Brahms may or may
not have been familiar with the Musikalische Exequien, he was generally aware of Schütz’s
music, and the texts he chose for the Requiem are similar to those in the Schütz, both consisting of passages from the Lutheran translation of the Bible.
In advance of the Bremen premiere in 1868, the clergy and music director at the Cathedral,
concerned that the Requiem did not mention Christ nor the Resurrection, pressured Brahms to
include a more obviously Christian movement. Brahms responded: “As far as the text is
concerned, I will confess that I would very gladly omit the ‘German’ as well, and simply put
‘Human,’ I also quite deliberately and consciously do without passages such as John 3:16 [For
God so loved the world, that he gave his only begotten Son, that whosoever believeth in him
should not perish, but have everlasting life.] On the other hand, however, I have no doubt
included much because I am musician, because I required it, and because I cannot challenge or
strike out the text of my revered poets, not even a ‘from henceforth.’”
ABOUT THE ARTISTS 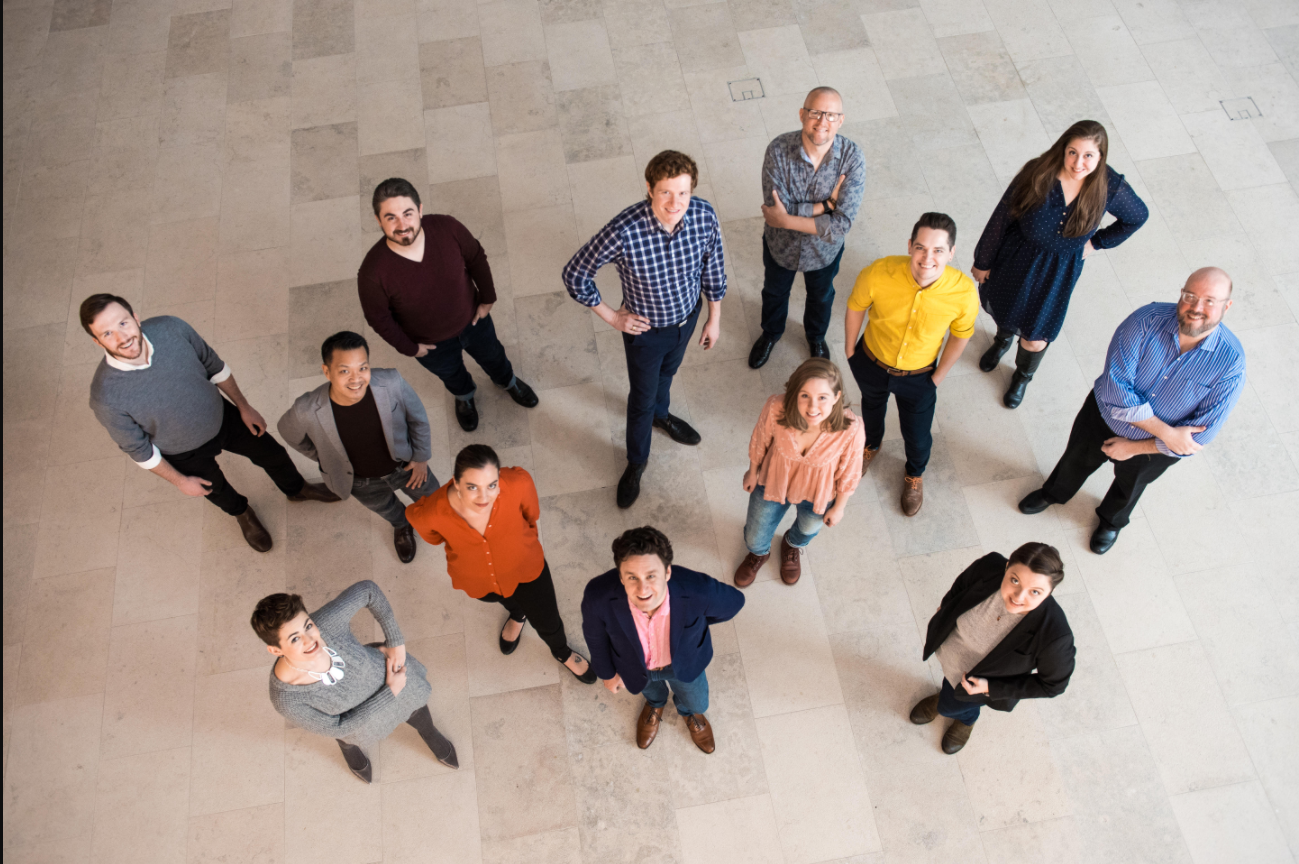 THE THIRTEEN
Praised for performing with “striking color and richness” (The Washington Post) and “a tight and attractive vocal blend and excellent choral discipline” (American Record Guide), The Thirteen is an all-star professional ensemble known for reimagining the potential of vocal music. Since its founding in 2012, the choir has been at the forefront of invigorating performances of choral masterworks ranging from early chant to world premieres and the centuries in between.
The Thirteen draws its artists from among the finest ensembles in the world, including Chanticleer, Seraphic Fire, Apollo’s Fire, Conspirare, I Fagiolini, Opera Philadelphia, Boston Early Music Festival, and Trinity Wall Street. The choir’s peerless singers are best described by National Public Radio commentator M.D. Ridge: “to talk about the remarkable abilities and sound of the individual singers would… be like trying to say which whitecaps on the ocean reflect the sun most beautifully, or which leaves on a tree dance most gracefully with the wind… I stand in awe.”
The Thirteen’s growing discography includes “Truth and Fable,” which premiered in October 2019, “Voice Eternal,” which was pre-nominated for a Grammy® award, the critically-acclaimed Christmas album “Snow on Snow,” “RADIANT DARK,” which features the finest works of the late Tudor period and reached #28 on the iTunes Classical Charts, as well as The Thirteen’s debut recording “…to St. Cecilia.
MATTHEW ROBERTSON
Praised for his “incisive tempos and dramatic pacing,” (Washington Classical Review), MATTHEW ROBERTSON is the driving force of the all-star professional ensemble, The Thirteen. As founder and Artistic Director, Robertson has led the ensemble in well over a hundred concerts, two dozen concert tours, six commercial recordings, and numerous world premieres. Robertson’s 2021-2022 season includes a triumphant return to in person performances and will include staged performances of Brahms’ Requiem, performances of Scott Ordway’s opera that Robertson commissioned, The Outer Edge of Youth, Monteverdi: The Lost Vespers II, Vaughan Williams’ Mass in G, a newly commissioned work from composer Trevor Weston and more. Past seasons included repertoire spanning more than half a millennium, collaborations with many of the finest instrumentalists of his generation, and world premieres by Scott Ordway, Melissa Dunphy, and Lori Laitman. Robertson’s growing discography includes six recordings with The Thirteen, the most recent of which, Truth & Fable, received four stars from Choir & Organ and Fanfare, with the latter writing “[The Thirteen] is confident and responsive, allowing Robertson to shape flowing lines and dramatic climaxes.” From 2010-2012 Robertson served as Assistant Conductor for the Westminster Symphonic Choir, conducting the choir in performance and assisting in preparation for concerts with the New York Philharmonic, Philadelphia Orchestra and the New Jersey Symphony Orchestra, for such conductors as Yannick Nezet-Seguin, Peter Schreier, Alan Gilbert and Jacques Lacombe
UNIVERSITY OF MARYLAND CHAMBER SINGERS
Founded in 2001 by Music Director Edward Maclary, the internationally renowned UMD
Chamber Singers specialize in the highest quality and most challenging repertoire from the
Renaissance, Baroque, 20th century, and Contemporary periods. The Washington Post has
described their singing as “…dazzling… impeccable… reverberantly alive.” The ensemble has
toured the globe, winning top prizes in international competitions and performed multiple
times by invitation for the American Choral Directors Association, the National Collegiate Choral
Organization, and the International Federation for Choral Music. The UMD Chamber Singers
collaborate regularly with the National Symphony Orchestra and the Baltimore Symphony
Orchestra and have performed with conductors such as Gianandrea Noseda, Marin Alsop, Iván
Fischer, Nathalie Stutzmann, and Nicholas McGegan, among many others. Alumni from the
ensemble are now singing, conducting, and teaching professionally throughout the United
States and around the world.
EDWARD MACLARY
EDWARD MACLARY is Professor of Music and Director of Choral Activities at the University of
Maryland School of Music. Under his leadership the UMD choirs have achieved international
renown, winning top prizes competitions around the world and appearing at major artistic
venues such as the Kennedy Center and Carnegie Hall. UMD choirs have become the ensembles of choice for both the National Symphony Orchestra and the Baltimore Symphony. He has served as an artist in residence at Indiana University, the Eastman School of Music, and
Westminster Choir College. Known for his advocacy of early music, from 2014 through 2017 he
was the Director of the Conducting Master Class at the Oregon Bach Festival. Maclary has
served as Chorus Master for many of the world’s great conductors and for orchestras including
the Boston Symphony Orchestra and the Cleveland Orchestra. He is a protégé of legendary
choral artists Robert Shaw, Margaret Hillis, and Helmuth Rilling.
ENSEMBLE PERSONNEL
THE THIRTEEN
Matthew Robertson, Artistic Director
Todd Stubbs, Managing Director
Valerie Simonsen, General Manager
Gilbert Spencer, Assistant Conductor
Alexandra Batsios, soprano
Steven Berlanga, bass-baritone
Andrew Bearden Brown, tenor
Aryssa Leigh Burrs, mezzo-soprano
Rhianna Cockrell, mezzo-soprano
Oliver Mercer, tenor
Edmund Milly, bass-baritone
Caroline Nielsen, alto
Caroline Olsen, mezzo-soprano
Corey Shotwell, tenor
Gilbert Spencer, baritone
Andréa Walker, soprano
Melissa Wimbish, soprano
UNIVERSITY OF MARYLAND CHAMBER SINGERS
Edward Maclary, Music Director
Lauri Johnson, Choral Administrator
Christopher Dale Auen, bass
Joshua Bates, bass
Sydney Black, alto
Jayden Brittain, bass
Amy Broadbent, soprano
Isabella Cadirola, alto
J. Solomon Collins, bass
Amanda Densmoor, soprano
Brynn Farlow, tenor
Mark Helms, tenor
Nathan Lofton, bass
Joel Zinkievich, bass
Archived Event