An Evening of Balinese Gamelan 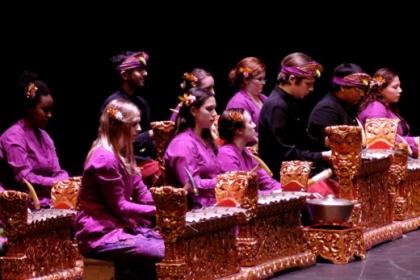 The livestream for this performance will be available to view until July 5.

Under the direction of I Nyoman Suadin, the UMD Balinese Gamelan Saraswati Ensemble presents an evening of traditional Balinese music. The ensemble takes its name from Saraswati, the Hindu goddess of knowledge and the arts. The gong kebyar style percussive instruments used by this ensemble were built by I Wayan Beratha, a leading instrument maker, composer, performer and teacher in Bali.

This means “Back and Forth” and is a segment of a longer piece which is a work in progress.

Puspanjali
I NYOMAN WINDHA
Born 1954
Daily life in Hindu Bali revolves around making offerings to a variety of spirits. This dance is a similar offering. It is performed to welcome the gods and guests and open formal functions. Puspa means flower, and Anjali means honoring so the dance is a form of honoring.

The piece’s main lyrical melody is based on the Javanese gamelan composition “Swara Suling” (The Sound of the Flute), which was composed to express the love of the flute and its beautiful sound.

There are many Balinese compositions based on the eight-beat gilak pattern. Characterized by the cycling gong pattern that alternates between the large gong and the small, higher-pitched kempur, the music using the gilak form typically accompanies ceremonial processions in Bali or forms the basis for longer compositions.

A Balinese Gamelan is a musical ensemble from Indonesia, typically from the islands of Bali or Java, featuring tuned metal-keyed metallophones and gongs, “conducted” by drums, and sometimes adding wind or stringed instruments. The word “gamelan” (pronounced “gah-meh-lan”) comes from the Javanese word “gamel,” meaning “to strike” or “to play.”
In Bali, the musical traditions evolved primarily in the context of the multi-faceted ceremonies of Balinese Agama-Hindu culture. Performance of music is seen as an offering to the Hindu deities, who are invited down from the heavens to visit the temples during temple ceremonies and other auspicious ritual occasions.
This evening you will hear music from the distinct instrumental tradition of gamelan gong kebyar. Gamelan Gong Kebyar appeared in Bali in the early 1900’s. It is characterized by great contrasts of timbre (sound quality), tempo (speed), and dynamics (volume). Kebyar literally means “to burst open,” such as a flower in sudden bloom.
In Bali, dance is always closely connected to the music. Many gamelan performances include dance as a major component, but also because the details of choreography and dance gesture are tightly synchronized with the music's accents and textures. The traditions evolved primarily in the context of the highly ornate, multi-faceted ceremonies of Balinese Hindu culture. In these dances, the performance is seen as an offering to the Hindu deities, who are invited down from the heavens to visit the temples during temple anniversaries and other auspicious ritual occasions. The movement is closely associated with the rhythms produced by the gamelan. The multiple levels of articulations in the face, eyes, hands, arms, hips, and feet are coordinated to reflect layers of percussive sounds.
Balinese dance was first inspired by nature, where the movements of the dancers were very simple and there was not an established pattern. The dancers simply let their bodies move with the rhythms of nature.
Audience members are welcome to come onstage at the conclusion of the performance to have a closer look at the instruments.
ABOUT THE ARTISTS
Originally from Tabanan, Bali, I Nyoman Suadin, a musician, composer, dancer, puppeteer and teacher, discovered music and dance as a young child by watching his father participate in the village gamelan and by playing in a children’s gamelan. He later received formal training at KOKAR, the National High School for the Performing Arts, in Denpasar, Bali. He has traveled throughout the United States and performed with gamelan ensembles since 1988. In addition to directing the University of Maryland ensemble, he teaches Balinese gamelan at the Eastman School of Music, Bard College, Gettysburg College, and Swarthmore College.
The University of Maryland Gamelan Saraswati is part of the Musicology and Ethnomusicology Division of the School of Music, and includes both undergraduate and graduate students from the School of Music and other departments of the university. The gamelan gong kebyar instruments were built by I Wayan Beratha, a leading instrument maker, composer, performer and teacher in Bali. Gamelan Saraswati takes its name from Saraswati, the Hindu goddess of knowledge and the arts.
ENSEMBLE PERSONNEL
UMD Gamelan Saraswati
Ensemble Director
I Nyoman Suadin
Performers
Christopher Adams
Andrew Ferguson
Alec Goodman
Cecilia Hu
Shilin Huang
Anna Kelleher
Peter Kozlov
Haocheng Li
Yiying Lu
Maria Paoletti
Christopher Ptak
Matthew Regan
Aditya Sarkar
All Gamelan Saraswati performers are UMD students registered for the course MUSC129G (undergraduate) and MUSC629G (graduate)—these courses are open for registration to any and all students.
Dancers
Ni Made Yoni Maniasa
Ni Ketut Yuli Kartika Inggas
Latifah Alsegaf
Archived Event