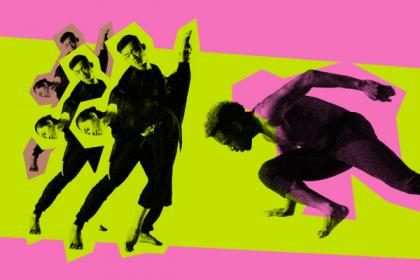 The School of Theatre, Dance, and Performance Studies’ Fall Dance Concert reflects on and celebrates the vitality of live performance. Choreographers explore a range of collaborative and technological processes through devised movement pieces. Each choreography is a living work of art that crystallizes a shared moment for performers and audiences alike.

Concessions: The Clarice lobby concession bar Encore will not be open for food and beverage sales during this event.

Performance is a form of research, philosophy, expression and communion driven by questions about ourselves, the world and the stories and systems we find ourselves operating within. The TDPS performance season exists to support students in rigorous artistic practice and collaboration. This season, making art together is particularly relevant and urgent. As we shift from dancing solos in at-home spaces to vibrant group choreographies, the grief and uncertainty of the COVID-19 pandemic is entangled with the joyful relief of being together once again. With this in mind, the Fall Dance Concert is an act of returning—returning with compassion and grit towards a deeper understanding of our shared humanity.
Weaving together movement, lighting, sound, costume and projection design, each dance is an invitation to lean in and to revel in the moments you find compelling, beautiful or curious. The choreography may not have a familiar storyline or directly translate an event into movement. Instead, a moment might resonate with you viscerally or personally—illuminated by the subtlest touch, a swell of action, a shift of light and color. Such moments channel empathy and connectedness into vitality. Please indulge in these moments, think about them, discuss them and return. Thank you for being here with us.
--Kendra Portier, director