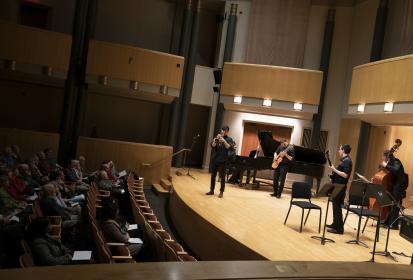 The Tom Baldwin and Gerry Kunkel combos present a thrilling evening of chamber jazz. Music selections include Straight Street by John Coltrane, Isfahan by Duke Ellington and Billy Strayhorn, In Walked Bud by Thelonious Monk and Violets for Your Furs by Tom Adair and Matt Dennis.

About Jazz Ensembles at UMD:
The School of Music’s jazz ensembles are composed of more than 100 students. The UMD Jazz Ensemble frequently performs at many off-campus events including the Maryland Music Educators Association annual conference and various local jazz festivals. Each year, the UMD Jazz Ensemble is one of three elite bands that performs at the Calvin Jones Big Band Jazz Festival—one of the most anticipated events on Washington, D.C.’s jazz calendar and frequently broadcast on the BET Network. Combos and big bands also perform a variety of outreach concerts at venues including the National Archives, public libraries, the National Building Museum, area schools and at campus events such as Maryland Day, galas and commencement activities.

All The Things You Are
Jerome Kern

Beauty and the Beast
Wayne Shorter

What Is This Thing Called Love?
Cole Porter

I Get Along Without You Very Well
Hoagy Carmichael
arr. Corey Hewitt

Violets for Your Furs
Matt Dennis and Tom Adair

No Question About It
Bobby Watson

TOM BALDWIN, bassist, composer and educator, has been a fixture of the Washington, D.C. area jazz scene for over 25 years. He has performed with a slew of prominent jazz artists, including Eric Alexander, Peter Beets, Gene Bertoncini, Stanley Cowell, George Garzone, Tutti Heath, Fred Hersch, Brian Lynch, Harold Mabern and James Moody. He appears as a sideman on over 50 recordings.
Baldwin’s original compositions can be heard on recordings by Jeff Antoniuk and the Jazz Update, The Tony Martucci Quartet and Quintet, and the Grammy award–winning Afro Bop Alliance, as well as his self-produced album “Glom On To This.” He has taught at several area universities, including the University of Maryland, College Park since 2000, and is a frequent guest clinician at college and high school jazz festivals throughout the region.

GERRY KUNKEL is an educator, composer, and studio and free-lance guitarist who has played with Aretha Franklin, Dianne Reeves, Audra MacDonald, Joshua Bell, Denyse Graves, Boys II Men, Joss Stone, country artist Martina McBride, and jazz artists Grover Washington Jr., Ron Carter and Clarke Terry.
Kunkel performs with the Baltimore Symphony Orchestra and the Washington National Opera House Orchestra. He has played in numerous theater productions including Ragtime, Chicago, Mamma Mia, Spamalot, Kiss Me Kate, Anything Goes and many more.
Known for his versatility as a guitarist, Kunkel has played on numerous recordings, shorts and full-length feature films, and national television and radio jingles. He has performed extensively with many different groups in the jazz, pop and classical music fields as a soloist, sideman and leader. His blues guitar can be heard at the Grammy Museum in Cleveland, Ohio, in an interactive exhibit that features “Jam–along Tracks” with the artist Keb’ Mo’. He has taught jazz studies and jazz guitar at the University of Maryland, College Park since 1997.