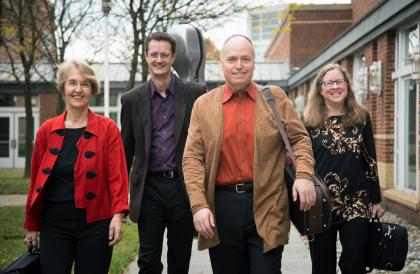 The digital recording of this event will be available to view until January 8. You may access the recording here.

Consisting entirely of UMD School of Music string faculty, the Left Bank Quartet performs a recital spotlighting music by African-British composer Samuel Coleridge-Taylor, and by Austrians Joseph Haydn and Erich Korngold. Coleridge-Taylor’s Fantasy Pieces are lush gems from the end of the 19th-century. Haydn enjoys newfound commercial success in his Op. 33, and Korngold writes his last piece in Europe before departing for the United States.

These four musicians, with their diverse and colorful backgrounds, came together through the auspices of the Theater Chamber Players, and rather unexpectedly discovered the joys of a vibrant and enthusiastic collaboration. They have been the Left Bank Quartet since 1999, taking their name from the fact that the Kennedy Center, their first regular venue, is situated on the left bank of the Potomac River.

Their combined experiences include participation in the major festivals of the musical world—Aspen, Banff, Chautauqua, Marlboro, Mostly Mozart, Prussia Cove, Ravinia, Santa Fe, Spoleto and Yellow Barn, to name just a few. Their teaching experiences, collaborations, national and international tours, recital and concerto performances, and success in international competitions give this quartet a rich and varied tapestry as they weave their musical message.

Salness has toured extensively, attaining international recognition as a performer and teacher. His performances have been broadcast by NPR, Bayerische Rundfunk and the British and Canadian Broadcast Corporations. Salness’s critically acclaimed recordings are found on the RCA, Telarc and Centaur Labels, among others. Salness was a member of the Audubon Quartet for twelve years, and he won the Deuxieme Grand Prix as a member of Nisaika in the 1984 Evian International String Quartet Competition. He has collaborated with many ensembles including the Orford, Moscow, Guarneri and Cleveland Quartets. Salness has participated in Aspen’s Center for Advanced Quartet Studies and in the Newport, Banff and Mostly Mozart Festivals. Formerly on the artist faculty of the Meadowmount School and distinguished teacher of violin at the Brevard Music Center, Salness is currently professor of violin at the University of Maryland, College Park.

McLain received her Bachelor and Master of Music degrees with high distinction from Indiana University, where she studied with and was assistant to James Buswell. Critically hailed as a “violinist with lots of style” by the Washington Post, McLain served as concertmaster of the Washington Chamber Symphony for ten seasons and is currently concertmaster of the Washington Concert Opera. She was a member of the Theater Chamber Players, as well as the Potomac String Quartet, which recorded the complete quartets of David Diamond and Quincy Porter for Albany Records. Of these cycles, American Record Guide wrote: “The admirable Potomac Quartet has done a great service for American chamber music in recording the complete quartets of both Porter and Diamond. These superb musicians play with sensitivity, lustrous tone, and the joy of discovery.”

Murdock has performed throughout the world with such groups as the Mendelssohn String Quartet, Music from Marlboro, Orpheus Chamber Orchestra, New York Philharmonic and Boston Symphony. She has been a guest of the Guarneri, Emerson and Vermeer string quartets, and has performed live for West German Radio, BBC, NPR's “Performance Today,” “St. Paul Sunday” and NBC’s “Today Show.” Currently professor of viola at the University of Maryland, College Park, she has served on the faculties of SUNY Stony Brook, Boston Conservatory and Hartt School, and served for five years as the Blodgett Artist-in-Residence at Harvard University. In the summers, she is on the artist faculty of the Yellow Barn and Kneisel Hall festivals. For 21 years Murdock was a member of the Los Angeles Piano Quartet. In the last several years, she has been invited to tour Turkey, Taiwan and Brazil to perform and present master classes.

Kutz has captivated audiences across North America, Europe and the Middle East. His diverse collaborations cut across musical styles, and have ranged from cellist Yo-Yo Ma to jazz great Ornette Coleman. Kutz is a founding member of the Murasaki Duo, a cello and piano ensemble that has released three commercial CDs and performs on chamber music series throughout the nation. Their CD “Duo Virtuoso” won the 2016 Violoncello Foundation’s “Listener’s Choice Award.” As an orchestral musician, Kutz summers in Chicago as a member of the Grant Park Orchestra’s cello section. He has also appeared in the sections of the National Symphony, New York Philharmonic, Minnesota Orchestra and Saint Paul Chamber Orchestra. He joined the faculty of the University of Maryland School of Music in 2015, where he holds the Barbara K. Steppel Memorial Cello Fellowship. Kutz has premiered over two dozen works, and he has been broadcast live on numerous NPR affiliates as well as nationally on PBS television’s Live from Lincoln Center. He holds degrees from the Juilliard School and Rice University.