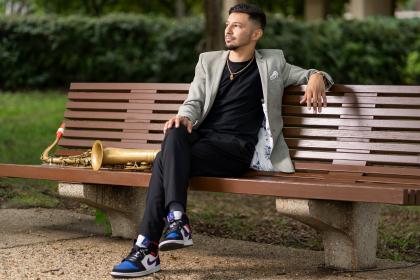 Did you miss the show? The link to the digital broadcast will be available to stream until October 23. Call the ticket office for access! 301.405.ARTS

Equal parts meditation and call-to-action, The Karma Suite is a blend of vocal interludes, instrumental jazz and percussive dances that comment on the social upheaval experienced in the United States in recent years. The piece, by Washington, D.C.-based multi-instrumentalist, composer and educator Elijah Jamal Balbed, was originally written in response to the threat of unrest brought by the 2016 election results and includes interrogations of voting inequity, gerrymandering and the separation of families at the U.S.-Mexico border. In addition to the powerful sounds of the Elijah Balbed Quintet, the piece features soprano, alto, tenor and bass vocalists, a live poet, a percussive dancer and vibraphonist/multi-instrumentalist Warren Wolf.

Balbed is a graduate of Howard University’s legendary jazz program. In 2021-22 he will lead a Jazz Clinic for UMD School of Music jazz students and teach a masterclass for classical percussion and jazz drumset students. Over the last decade, Balbed has established himself as a versatile and acclaimed saxophonist in the D.C. area and beyond. His career has taken him to Japan, Jamaica, Panama, the United Kingdom and Russia. Concluding his visit at The Clarice, Balbed will visit and engage with students in the School of Music’s “Music as Global Culture” course—fitting with his background as a U.S. State Department cultural diplomat.

Elijah Jamal Balbed is one of the premier jazz artists in Washington, D.C. He has been named Best Tenor Saxophonist and Best New Jazz Musician by the Washington City Paper, and has had several media features including Capital Bop, Smithsonian Magazine, OnTap Magazine (now District Fray) and The Washington Post. An alumnus of the legendary Jazz Studies program at Howard University, Elijah has established himself as a versatile musician with several musical projects and interests. Elijah and his band the EJB Quartet were the winners of the 2020 DC Jazz Prix for their performance of Elijah's acclaimed body of work The Karma Suite.

In addition to Jazz, Elijah has a deep love for DC’s indigenous music known as Go-Go. Elijah performed with The Godfather of Go-Go Chuck Brown from 2011 until Mr. Brown’s passing in 2012. In 2014, Elijah founded The JoGo Project–a Jazz / Go-Go fusion band dedicated to promoting and preserving the legacy of DC’s unique art form. Since then, the band has become one of the only Go-Go bands today consistently writing and producing original music.

Between 2013-15, Elijah participated in residencies at The Kennedy Center (Jazz Ahead Program), Strathmore, Bohemian Caverns and 202Creates. In 2018, Elijah was named a 202Creates Resident Artist. In 2019, Elijah and JoGo Project won a WAMMIE Award for Best Go-Go Song (Dear Draylen). Currently, Elijah is a resident artist & instructor at Suitland High School for the Visual and Performing Arts, as well as the Bethesda Blues & Jazz Youth Orchestra.

Since then, Elijah has also established himself as an International Artist having performed in Japan, the United Kingdom, Qatar and on the Capital Jazz Cruise which has taken Elijah all around the Caribbean Islands and given him the opportunity to perform with Mike Phillips, Lalah Hathaway, Eric Roberson, Jonathan Butler, Maysa, Raheem DeVaughn, Avery Sunshine and many others. In 2018 and 2019, Elijah went on cultural diplomacy tours in Russia on behalf of the U.S. State Department. In 2021, Elijah traveled to Port-au-Prince, Haiti to perform at the Port-au-Prince International Jazz Festival (or PAPJAZZ). Elijah maintains a full performance schedule and toured this past summer and will tour this fall.

During the COVID-19 pandemic, Elijah started organizing concerts in parks and other public spaces in DC which came to be known as "JazzMob DC." Elijah's efforts were recognized with a full page spread in The Washington Post.

"As much of the music world went silent during the pandemic, I was incredibly inspired to see Elijah continuing to find creative ways to share music with others. Whether it was in parks, live-streams, or pop-up concerts outside, he was there - refusing to be silenced. His determination and passion were beacons of light to our city, our musical community, and all those within earshot of his amazing artistry."

ABOUT THE KARMA SUITE

The Karma Suite was written by saxophonist and composer Elijah Jamal Balbed. Elijah grew up in and around Washington, D.C. For a long time he didn't pay much attention to what was going on in the various government buildings downtown. However, the recent few years have opened Elijah's eyes to the importance of being politically informed. The Karma Suite is Elijah's first full-length piece that is primarily inspired by political and social events.