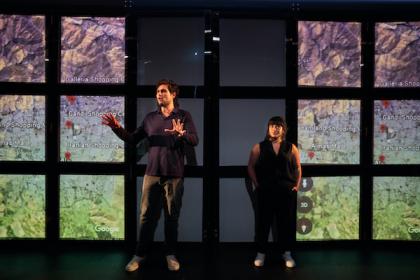 Presented By:
The Clarice
Roshan Institute for Persian Studies
Accessibility:

From themes of racial violence and cultural appropriation to multiculturalism and gender equality, the work of The Clarice's artists is complex, provocative and deeply sensitive. Arts Citizenship Talks (ACTnow) are opportunities to hear from these artists about the issues reflected in their works. These conversations are an invitation to act now!

In the first ACTnow of the 2021-22 season, The Clarice partners with UMD’s Roshan Institute for Persian Studies to host theater artist and activist Javaad Alipoor. Javaad will discuss how converting his plays into virtual multimedia works has helped to accomplish his activist vision and practice.  Moderated by Roshan Institute Director Dr. Fatemeh Keshavarz and featuring Dr. Marjan Moosavi, Roshan lecturer in Persian studies and performing arts, this talk will be followed by a showing of Javaad’s play Rich Kids: A History of Shopping Malls in Tehran.

Reserve tickets to Rich Kids: A History of Shopping Malls in Tehran.

In 2017, he began writing a trilogy of plays about how digital technology, resentment and fracturing identities are changing the world. The Believers Are But Brothers, described as “one of the most fascinating shows I have seen in an age” (The Financial Times) excavated the stories of young men at the extremes of hyperreality. It opened at Summerhall in Edinburgh in 2017 where it won a Fringe First Award, before transferring to London’s Bush Theatre. It has toured nationally and internationally over the last four years, and in 2019 was adapted for television by the BBC and The Space.

Its sequel–Rich Kids: A History of Shopping Malls in Tehran–“breaks all the rules of theatre behaviour” (The Times) and premiered at the Traverse Theatre in 2019, winning a Fringe First Award. Its London transfer to Battersea Arts Centre in early 2020 and subsequent national tour was postponed by the COVID-19 pandemic inspiring the creation of a new digital version for online audiences which has toured virtually to HOME Manchester, Oxford Playhouse, Electric Dreams Festival and Under The Radar at The Public Theater.

Other recent projects he has created for The Javaad Alipoor Company include: What Is A Muslim? a digital collaboration with graphic artist and calligrapher Razwan Ul-Haq, exploring Muslim identity and political geography with a group of young men of Muslim heritage in the Paddington area of London; and The Colour of Our Politics, a podcast series exploring how anti-racism in the United Kingdom today has been shaped by a long history of activism and resistance, created with Tanya Vital.

He was a founder member of the International Alliance in Support of Iranian Workers and The Syria Solidarity Campaign and the Bradford-based pro-European Union Migrant organization #BradfordSaysEveryoneStays.

Javaad's writing about international politics, cultural policy and art has been featured in The Guardian, The Independent and The Stage. His plays are published by Oberon and his poetry by Art in Unusual Places.

Fatemeh Keshavarz, born and raised in the city of Shiraz, completed her studies in Shiraz University and the University of London. She taught at Washington University in St. Louis for over twenty years where she chaired the Department of Asian and Near Eastern Languages and Literatures from 2004 to 2011. In 2012, Keshavarz joined the University of Maryland as Roshan Institute Chair in Persian Studies and Director of Roshan Institute for Persian Studies. Keshavarz is author of award winning books including Reading Mystical Lyric: the Case of Jalal al-Din Rumi (USC Press,1998), Recite in the Name of the Red Rose (USC Press, 2006) and a book of literary analysis and social commentary titled Jasmine and Stars: Reading more than Lolita in Tehran (UNC Press, 2007). She has also published other books and numerous journal articles. Keshavarz is a published poet in Persian and English and an activist for peace and justice. She was invited to speak at the UN General Assembly on the significance of cultural education. Her NPR show “The ecstatic faith of Rumi” brought her the Peabody Award in 2008. In the same year, she received the Herschel Walker Peace and Justice Award.

Marjan Moosavi is the Roshan Lecturer in Persian Studies and Performing Arts and a member of the Roshan Initiative in Persian Digital Humanities. She holds a Ph.D. in Theatre and Performance Studies from the University of Toronto. Her work, whether academic or artistic, examines the dynamics of theatre-making and performance in the Persianate world and their intersection with gender, religion and politics. Her scholarly articles and interviews are published in The Drama Review (TDR), New Theatre Quarterly, Modern Drama and Asian Theatre Journal. She is also a longstanding Regional Managing Editor for TheTheatreTimes.com. Dr. Moosavi’s digital and curatorial collaborations include Digital Guide to Theater of the Middle East and the First Digital Photo Exhibition of the Middle Eastern Theatre. She is the recipient of the Fellowship offered at the Mellon School of Theatre and Performance Research at Harvard University. Her research interests include theatre and performance studies, Middle Eastern (and Persian) Studies, diaspora and migration, digital humanities and multimedia art studies.

Around the world, the gap between rich and poor continues to widen. Images of the children of the elite and of post-colonial dictatorships often feature cash and seaside holidays while the working population suffers under sanctions and dictatorships. In this virtual presentation, The Javaad Alipoor Company’s Rich Kids: A History of Shopping Malls in Tehran explores entitlement and greedy consumption, as well as the role of digital technology, in creating this new apartheid and gentrification. As the performance is completely live streamed, audiences can access the performance from the comfort of their own homes with a supplemental experience on Instagram that is not required, but highly recommended!

Always taking stories beyond the stage through powerful multi-platform creations, The Javaad Alipoor Company explores the intersection of politics and technology in our ever-changing world. The company is devoted to creating works for diverse audiences and communities, and their 2021-22 virtual visit with The Clarice will include an Arts Citizenship Talk (ACTnow), visits to the UMD School of Theatre, Dance, and Performance Studies and a dynamic partnership with UMD’s Roshan Institute for Persian Studies. In 2017, the company began writing a trilogy that highlights society’s fracturing identities and technology’s impact on the world; Rich Kids is the second installment.

HOW AND WHERE TO WATCH

This livestream will not be presented on The Clarice’s Vimeo platform. The performance will be streamed through a YouTube link hosted by Javaad Alipoor Company. Ticket holders will receive access links to their email. As you stream the event, we invite you to follow simultaneously on instagram to enhance your viewing experience by following @shoppingmallsintehran, where artists will facilitate additional interactive components.