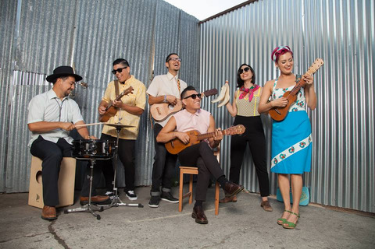 With the richness of nylon-stringed guitars, the complex harmonies of classical music, and the sharp lyricism of rap, Las Cafeteras creates songs that are as much about rhythm and movement as they are about immigration, equality and acceptance. The band’s 2018’s “Tiempos De Amor” documents the fortitude and resilience of migrant families, while 2017’s “If I Was President” stands in direct contrast to Donald Trump’s open disdain for them. Celebrating their mixed heritage with irrepressible hooks and powerful declarations, Las Cafeteras has become a beloved ambassador of America’s cultural crossroads and the hope of a more open, diverse future.

Las Cafeteras were named for the place where a group of of East Los Angeles students became bandmates while studying son jarocho, the infectious folk style of Veracruz, Mexico. They’ve come a long way since their lessons at The Eastside Café. The band is now a direct reflection of and response to the tumult of modern-day political discourse in the United States. Indeed, at a 2018 rally in Indiana, President Trump called out Congressman and Deputy Chair of the DNC, Keith Ellison, for wearing a Las Cafeteras T-shirt that proclaimed, “I do not believe in borders.” The band’s musical style, which Los Angeles Times has called a “uniquely Angeleno mishmash of punk, hip-hop, beat music, cumbia and rock,” is a celebration of their refusal to play within ascribed boundaries.