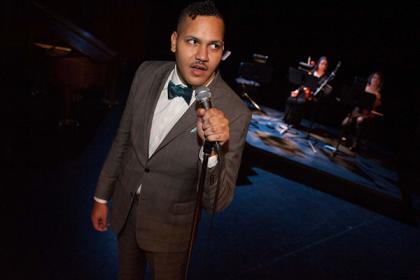 After moving audiences at The Clarice in 2017, trumpeter, composer and comedian Ahamefule J. Oluo returns with “Susan,” a memoir delivered through wry comedic monologue and live, grand-scale big-band and jazz. This vulnerable theatrical work about his childhood tells the story of how his Midwestern mother was left to raise two bi-racial babies after the sudden departure of her husband, a Nigerian doctoral student. There’s obvious chemistry between Oluo’s singular voice and the grand creation of the music; at times, when the story is too painful for him, the ensemble carries the show. “Susan” is a category-defying reflection on how race, class, and appearance impact everyone—and how we play the hand that we’re dealt.

In 2002, after being selected as Town Hall Seattle’s first-ever artist-in-residence, Oluo realized he wanted to do something different. After years of performing and recording with prominent musicians like John Zorn, Hey Marseilles, Wayne Horvitz and Macklemore, Oluo knew he had his own story to tell—and the diverse set of skills to do it. During his time in residency, he began experimenting with blending big-band, jazz, standup and memoir to formulate a new musical and theatrical identity.