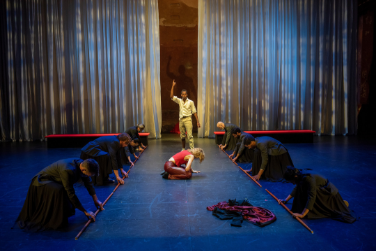 Learn more about the artists

New York’s renown SITI, a collaboration between theatre and opera director Anne Bogart and Japanese director Tadashi Suzuki, takes on one of Euripides’ greatest surviving works, “The Bacchae.” Nine actors will tackle Aaron Poochigian’s new translation with unbridled energy, navigating the lyrical text of the play with evocative set design and choral moments full of swagger and bluster. Ellen Lauren, who served for many years as one of SITI Company’s lead actors, reimagines the God Dionysus as a wine-slinging, gender-bending trickster from whose hands destruction and debauchery flow. Though the story is more than 2,400 years old, this dramatic exploration of cult versus society, tyranny versus populism, and restraint versus excess feels just as relevant in modern-day America as it might have in Ancient Greece. The result is a poetic intimacy between script and stage.

For nearly three decades, SITI has been at the helm of energizing and evolving American contemporary theater through the creation of new works, the training of new talent and an unwavering emphasis on cultural exchange. The self-described “gymnasium for the soul” has ongoing relationships with the Wexner Center for the Arts, University of California, Berkeley, Carnegie Mellon and Columbia University.

“SITI recited [The Bacchae] like a spell; the effect was hair-raising.” —The Los Angeles Review of Books