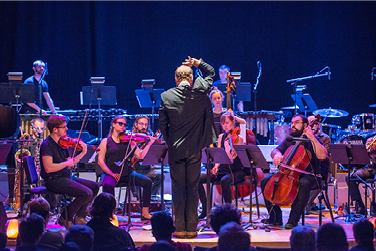 Presented By:
Artist Partner Programs
Venue:
The ArtHouse - PLEASE NOTE: The ArtHouse is an off-campus venue, not at The Clarice (click here for map).
Seating:
Reserved and General Admission
Program Notes:

wild Up is a modern music collective – a group of Los Angeles-based musicians committed to creating visceral, thought-provoking happenings that defy convention. They push beyond the constraints of the concert hall to reach audiences where the beating heart of the community resides, in spaces as transcendent and varied as their experimental classical sound.

"Great ideas create change," says Chris Rountree. "Great ideas empowered with the megaphone of art are capable of immense social change. Music has long been a catalyst for this type of change: In 1972 John Lennon wrote and performed a song about the wrongful imprisonment of activist John Sinclair — Sinclair was released from prison hours later. For We the People, wild Up, UMD students and community members come together to create a happening exploring the power of music and art as a seed for social change."

The Clarice's Visiting Artist Series brings you the Speed of Sound Sessions (S.O.S.), a celebration of musicians who support and promote composers whose work was created in the 21st century and who respond to the contemporary world in which we live.  The S.O.S. Sessions are a fun, interactive way to engage with adventurers just like you.

Join us after the 9 PM performance for an opportunity to meet the artists and mingle with your fellow guests, right here at MilkBoy ArtHouse!

Join wild up's artistic director and conductor Christopher Rountree for Do Good Dialogue: Artmaking as an Actionable tool on Tuesday, February 13, 2018 at 7 PM

Do Good Dialogue: Artmaking as an Actionable tool