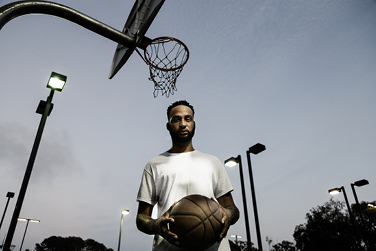 Presented By:
Venue:
The ArtHouse - PLEASE NOTE: The ArtHouse is an off-campus venue, not at The Clarice (click here for map).
Seating:
Reserved and General Admission
Estimated Length:
55 minutes with no intermission
Program Notes:

When Jamel’s mother discovers her young son playing with a toy gun, she knows it’s time to explain the rules of the game to him – the rules of surviving as a Black man in America. In this explosive solo performance combining verse, prose and "sh**-talkin’,”Keith A. Wallace draws on his own youth in Philadelphia to examine the effects of racism, the question of excessive force used by police and the value of Black lives in this country. Co-created and directed by Deborah Stein.

Originally developed for La Jolla Playhouse’s Without Walls Festival, The Bitter Game comes to The Clarice following its successful run at the Under the Radar Festival in New York City. The performance will be accompanied by a panel discussion featuring campus and community activists and law enforcement representatives.

“High-impact… a sharp reminder of the persuasive powers of live theater.” – The New York Times

Keith Wallace is an activist by the very nature of his artistry. He admires the work of these organizations in the quest for racial justice and equality.

Join us on Tuesday, September 26 at 7 PM for Do Good Dialogue: Hands Up, Don't Shoot! at the Nyumburu Cultural Center.

Know Your Rights!
Join us after the Wednesday, September 27 performance for a brief interactive workshop, led by lawyer and UMD alumnus Gregory Yancey.

Baltimore and Beyond
Join us after the Thursday, September 28 performance when Baltimore activists will lead a round table discussion designed to put the community at the center of the movement for change.

How to Resist: Then and Now Cinema and Politics

The Bitter Game Post Performance Roundtable: Baltimore and Beyond