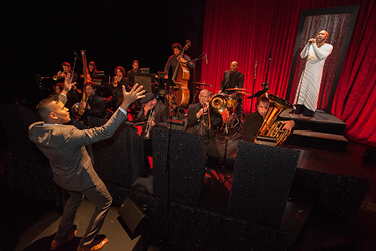 Please note: the venue for this event has changed. This event is now at The Clarice in the Dance Theatre.

As the star of his own musical autobiography, comedian/musician/storyteller Ahamefule J. Oluo is electrifying. Part experimental pop opera for 17-piece orchestra and part comedic storytelling piece, Now I’m Fine is compellingly energetic, blending original music with darkly comic personal monologues about illness, despair and regeneration. A virtuosic performance by vocalist okanomodé further illuminates this deeply relatable story that ranges from epic to intimate. Oluo’s storytelling was recently featured on This American Life. He is the founder of the hard-jazz quartet Industrial Revelation and has collaborated with Macklemore, Das Racist, Hey Marseilles and many others.

“When he conducts his band … he bounces on the balls of his feet … temporarily defying gravity in every sense of the word.” – The New York Times