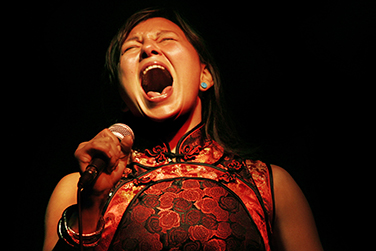 Tagaq, who self-describes her unique guttural vocal style as “scream, grunt, growl, groan, flutter, quiver, howl,” is a force to be reckoned with, having just beaten out Arcade Fire and Drake to win the prestigious Polaris Music Prize. She is also an outspoken advocate for her indigenous peoples’ traditions and hunting practices.

In this performance, she reclaims the controversial 1922 classic silent film Nanook of the North, considered the world’s first major work of non-fiction filmmaking yet rife with staged scenes of buffoonery and feigned Inuit ignorance of modern accoutrements.

Drawing on her childhood on Nunavut’s Victoria Island, Tagaq’s sense of the sound of the Arctic spaces shown in the film transforms the images, adding tremendous feeling and depth to what is a complex mix of beautiful representations and racially-charged clichés.

Tanya Tagaq in Concert with Nanook of the North was commissioned by TIFF Bell Lightbox as part of its film retrospective, First Peoples Cinema: 1500 Nations, One Tradition.

Nanook of the North film is used courtesy of The Flaherty.