Salt of the Earth - NO LATE SEATING 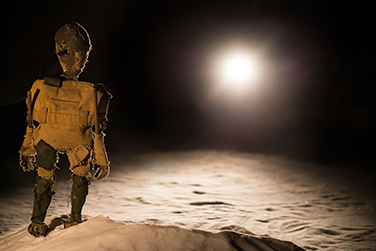 No late seating: Please allow extra travel time, as we are unable to offer late seating for this performance.

A thousand pounds of salt become a punishing Middle Eastern desert; plastic tanks barrel down paper streets; and a faceless, nameless puppet emerges a rebel hero in this work by artist Zvi Sahar. Puppetry and hand-painted miniature sets combine with live filmmaking and projected video feeds, as a Lilliputian universe is created and destroyed before our eyes.

In Salt of the Earth, inspired by the bestselling Israeli novel The Road to Ein Harod by Amos Kenan, Sahar and PuppetCinema show us a dystopic world in which our protagonist — fleeing his country’s latest military coup — discovers the meaning of perseverance, survival, and ultimately, freedom.

This performance by PuppetCinema is funded in part by a generous gift from Charlie Reiher.

Co-sponsored by the Joseph and Alma Gildenhorn Institute for Israel Studies.

Salt of the Earth: Peril and Puppets

This blog post is by Chelsey McLaughlin, a senior theatre major.

The stage: black. The curtains: black. From the left wing of the stage appears puppeteer Zvi Sahar. He approaches the center stage dressed in what we call in the field of puppetry “full blacks...

Join the artists for a conversation with the audience following the performance.