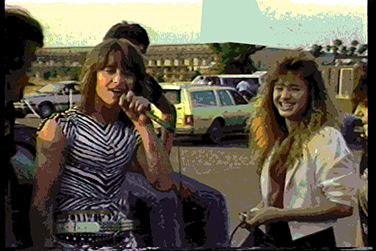 When aspiring filmmakers Jeff Krulik and John Heyn visited the Capital Centre parking lot on May 31, 1986, they had little more in mind than to document a fan scene at full peak. What they ended up creating was a cult film now considered among the greatest rock documentaries of all time. Just under 17 minutes long, Heavy Metal Parking Lot features local heavy metal fans expressing their enthusiasm for Judas Priest before the band performed in concert that night. Thirty years later, the film continues to resonate with fans around the globe.

The University of Maryland is proud to honor both the legacy of the film and that of its co-producer. Jeff Krulik, a lifetime Marylander and graduate of UMD (B.A. English, 1983), is an independent documentarian, videographer and cultural preservationist who has built a distinct career tapping into the rich ore of local culture in the Maryland/D.C. region. In 1996, The Washington Post noted that his esteemed documentaries “demonstrate a loving eye for Americana and eccentricity.”

The Jeff Krulik Collection, acquired by the Mass Media & Culture Collections within the UMD Libraries Special Collections & University Archives in November 2015, includes research files and source tapes for more than a dozen documentaries, as well as photos, catalogs, magazines, guides, posters, ephemera and audiovisual materials that represent a lifetime fascination with the offbeat and unusual. The collection is currently being processed, and will be available to researchers within the next two years.

To celebrate the 30th anniversary of Krulik’s most iconic film, the exhibit “Heavy Metal Parking Lot: The 30-Year Journey of a Cult Film Sensation", will open in the Gallery at the Michelle Smith Performing Arts Library, illustrating the film’s unexpected path from bootleg copies to international fame. Additional items from the Krulik Collection will also be on display.

This lively grand opening will feature short presentations by film scholars, a screening of the film with Q&A session with Jeff Krulik and John Heyn, and music by Daraja Ensemble, the School of Music's Graduate Fellowship Woodwind Quintet.