Deadline extended: Apply to perform in the 2016-2017 NextLOOK season

Are you a local performing artist who is interested in developing new work? Do you or your company want audience feedback on projects you are designing? Do you value input in your creative process?

Congratulations to UMD School of Theatre, Dance, and Performance Studies’ Meghan K. Abadoo, the recipient of the Audience Choice Award at the 33rd Annual Choreographers’ Showcase!

The National Orchestral Institute and Festival (NOI+F) will create a live recording of its June 11, 2016 concert, to be released via top classical music label Naxos. This is the second year of an ongoing agreement, representing Naxos’ first partnership with a student-based summer music festival.

“With projects like NOI, it is often the case that the final performance of a work is not only a well-conceived rendition, but also a document of the emotional and intellectual transformation that the musicians experienced during the residency,” [Samuel] Adams said. “I feel incredibly privileged to have my work be a prism through which this kind of transformation can happen.”

Who is Don Giovanni? The title character in Mozart’s 1787 opera has a larger-than-life personality, but what lies beneath?

Before the Sunday matinee of the Maryland Opera Studio’s production of Don Giovanni, directed by Andrea Dorf McGray, School of Music professors Nick Olcott and Olga Haldey joined Maryland Opera Studio alumna Jennifer Forni for the inaugural Opera Resonates! discussion. The panelists talked gender, sex and class in Don Giovanni, and I agree with their conclusion: Though the opera is named for the infamous male character, it really belongs to the women.

Is he a complex character, or is he simply one-sided? Eversole gives a compelling performance with a strong baritone that cuts through the chamber music. He projects a convincing sense of entitlement, a haughtiness in his rich, resonant voice, and when he faces his final fate, the audience is almost giddy with satisfaction.

Tartuffe or Not Tartuffe?

This blog post is by Kathleen Kelly, a junior government & politics and communications double major.

Tartuffe, originally written in French by Molière in 1664, was vibrantly brought to life by the UMD School of Theatre, Dance, and Performance Studies this season. The play depicts how a family’s life is turned upside down as a certain houseguest by the name of Tartuffe acts as the moral authority over all their lives, when in fact Tarfuffe is nothing more than a hypocrite who enjoys meddling in their lives. This interpretation of one of the most famous comedies written by Molière is delightfully comical and great fun for the entire audience.

UMD’s School of Theatre, Dance, and Performance Studies added some modern touches to their interpretation of the play. Characters were often seen playing on their cell phones, or would call each other to inform them of the goings-on in the house.The addition of modern technology to the storyline of the play only helped make it more relatable to audience members.

The Clarice Smith Performing Arts Center at the University of Maryland is pleased to announce the appointment of Richard Scerbo as the new Director of the National Orchestral Institute and Festival (NOI+F). The institute is a four-week program of intensive study for orchestral musicians on the thresholds of their professional careers. NOI+F offers its participants important tools for professional success and musical fulfillment, as well as preparation for the vital challenges facing twenty-first century musicians. Festival events open new avenues for community engagement and participation in the discovery and appreciation of orchestral performance. Enlivened audiences follow the trajectory of these talented students and their teachers as they form this critically acclaimed orchestra each summer.

Edmar Castaneda Resurrects and Ignites the Harp at The Clarice

The Venezuelan llanos stretched out before me, painted in a nostalgic haze, the land pulsing and blurring with each pluck of the harp, every coax of Edmar Castaneda’s fingers causing memories to peel themselves away from the dark closets of my mind and dance before me on the cabaret style theatre on a Friday night.

It was a fascinating thing to watch Castaneda and Tierra perform together, their souls clearly forged from the same stone. It’s not surprising since they are husband and wife—20 days after meeting, they got married and now have 2 kids plus 12 years of marriage. Both have the gift of smudging reality, making the music visible across the air, their passion and devotion vibrating the skeletons of the crowd.

Intimate Apparel and The American Dream

Philip Kershaw is a senior theatre and history double major, and Marina di Marzo is a senior theatre and broadcast journalism double degree candidate. Here, they give some insight about Pulitzer Prize-winning playwright Lynn Nottage's Intimate Apparel, a UMD School of Theatre, Dance, and Performance Studies production that runs October 9-17.

The American Dream is the first product we ever buy. It comes in a shiny package with the promise of the world being at your fingertips if you give in to its alluring aroma. The willingness to bet on ourselves to be able to reach the happy ending that we all desperately desire is injected into our psyche from an impressionable age and never truly leaves us. But what if you don't get that happy ending? What if there are roadblocks on the pathway to the Promised Land that you cannot move?

Nottage's work highlights the ties that bind us together, the inner stitching of the American quilt whose individual panels represent a wealth of differing experiences.

Auditions for the 33rd Annual Choreographers Showcase are open to all dance-makers, aged 18 years and older, who live in Maryland, Virginia or the District of Columbia. Live auditions will be adjudicated by our expert panelists, Leah Cox and Zvi Gotheiner. Six finalists will be selected to receive an honorarium of $800 and present their work in concert on Saturday, February 6, 2016. There is no fee to audition.

Auditions will be held in the Dance Theatre at The Clarice on December 5 & 6, 2015, from 10AM to 6PM each day. Auditions are by appointment only. To schedule an audition, apply here. The deadline to apply is November 30, 2015.​

A bridge woven by cameras, lights, speakers, hundreds of text messages and e-mails, dozens of tongues lighting the path, images not flickering but incarnating a beating heart that’s a continent or a nation away, just a few feet in front of you.

I was surprised how intimate the set up was, there was no room to be self-conscious since the only thing I saw was a full-body image of Miguel Angel. That way, I was completely focused and invested in him, instead of being consumed with my appearance or demeanor. 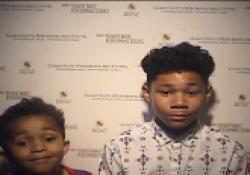