For nearly 30 years, the National Orchestral Institute + Festival has been a training ground for orchestral musicians on the precipice of their professional careers. NOI alumni occupy positions in nearly every major American orchestra as well as numerous positions in premiere service bands. Many others are teachers, college professors and arts administrators. 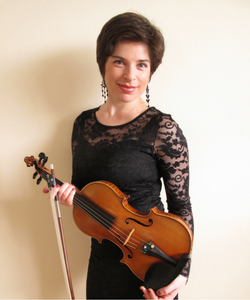 Sonia Shklarov, a 2012 NOI alumna and current violin player with the Winnipeg Symphony Orchestra, recently shared with us some reflections about her time at NOI, and how it has shaped her career.

I was a violinist at NOI in the summer of 2012, immediately after finishing a degree at Carnegie Mellon University, just about to move to Toronto and plunge into the freelance scene there. I was a bit nervous coming to NOI, as I felt like I was no longer a student, and a lot of pressure to act professionally and get as much as I could out of what felt like my last learning opportunity before hitting the professional leagues.

NOI ended up being the best festival experience of my life, a perfect balance of orchestra, chamber music and overall education about the music career.

First of all, NOI was inspiring to me musically, getting a chance to work with conductors Leonard Slatkin, Asher Fisch and Alan Gilbert, and being coached by principal second violinist of the Pittsburgh Symphony, Jennifer Ross. Playing great music (Mahler 3!), and working with incredible colleagues, all of whom had a genuine passion and love for music, was unlike anything I had experienced at other festivals or even at university.

Second, but not any less valuable, were the lectures: lectures on entrepreneurship, what musicians' role is in society, the role of the conductor and her/his relationship with the orchestra, how to "make it" even if you don't have a stable job, and how to be strong and survive in the face of career challenges. Listening to the speakers at NOI gave me a well-rounded, rich and realistic perspective on life of a musician. I couldn't have wished for a more ideal bridge between being a student and starting life as a professional musician.

Just a little bit about what I've been up to, since: after leaving NOI, I was a freelance performer in Toronto, Canada, from August 2012 until May 2016. I was lucky enough to play as an extra with many orchestras in South Ontario, most notably the Canadian Opera Company in Toronto. I spent the last season (2015-2016) playing full-time in the first violin section of the Kitchener-Waterloo Symphony. I've also held a position as Core First Violin with the Hamilton Philharmonic Orchestra (an amazing group of great people and musicians!) in Ontario, Canada, since March 2014.

Most recently, in May 2016, I won a job in the First Violin section of the Winnipeg Symphony Orchestra in Manitoba, Canada, and started working here in September 2016. I largely attribute audition success, positive attitude, and musical/lifestyle expectations to tips I learned at NOI!