This summer, Grammy Award-winning conductor and Albany Symphony Music Director David Alan Miller returns to the NOI stage. He’ll lead a concert of American Masterworks that will be recorded live and released on renowned classical music label NAXOS. We spoke with him about his most moving orchestral experiences, his return to NOI and his vision of the symphony orchestra’s future.

Tell us about a particularly moving orchestra concert that has stuck with you. 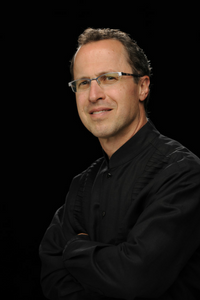 One of the most moving concerts I've ever experienced was my last appearance at the NOI two summers ago. And I'm not just saying that because I'm writing this for the Clarice's newsletter!  We were performing and recording John Corigliano's monumental AIDS Symphony – his Symphony No. 1, Of Rage and Remembrance, along with Michael Torke's brilliant, youthful piece, Bright Blue Music and Copland's Appalachian Spring. The pathos and power of Corigliano's requiem for loved ones lost to AIDS, and the contrasting jubilance of Torke's gorgeous piece, as well as the astounding performances by our young orchestra just swept me off my feet.  I could barely breathe at the end; I was so moved by the passion and beauty of their performance!

This is your second time conducting an NOI concert that is being recorded for NAXOS. What would you like the audience to know about this year's exciting repertoire?

These are three essential pieces in the American repertoire. Rugs' rugged Suntreader from the 1920s is a bracing, thrilling, uncompromisingly modernist masterpiece for huge orchestra. It sounds as fresh as it did on the day it was written.  Steven Stucky's Second Concerto for Orchestra is another orchestral tour-de-force from 2003, which won the Pulitzer Prize in 2005. Steve was a great American composer and a good friend of mine who died suddenly last year. He was one of our greatest masters of orchestration; he makes the orchestra sound absolutely magical and radiant all the time. John Harbison is another composer to whom I'm very close. His Fourth Symphony is a great American symphony, full of charm and heartache in equal measure. Also, in the last movement, you can really hear John's passionate interest in, and love of, jazz music. These are three monumental classics, and I'm so honored we'll have the opportunity not only to perform them, but also to record them for NAXOS.

How do you envision the symphony orchestra 50 years from now?

I think it will be a much more inclusive and flexible kind of ensemble, able to turn itself into a giant world music ensemble with the addition of all sorts of instruments and performers not currently in orchestras, or a wildly inventive technologically enhanced group.  I believe, or at least I really hope, that orchestras will continually adapt to all the technological, musical, artistic innovations of our time and beyond. 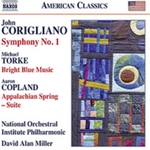 Announcing the Naxos Partnership
About the 2015 Recording