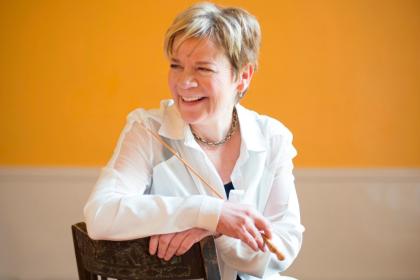 Stadium Drive Garage is closed for repairs. Free parking is available in Lots 1/Z. A shuttle service from Lot 1 to The Clarice will be available from 6:30PM-11PM. Please visit our Parking & Directions page for more details.

Marin Alsop, NOI+F’s trailblazing music director, returns to The Clarice in the final week of the 2022 festival to lead the NOI Philharmonic in works by two of today’s star compositional voices: James Lee III and Carlos Simon. Lee III’s Chuphshah! Harriet's Drive to Canaan tells the story of Harriet Tubman: a story of victory, pain and, most importantly, freedom. In AMEN!, Simon recreates his childhood musical experiences, paying homage to his family’s affiliation with the African American Pentecostal church over four generations. Richard Strauss’ emblematic Ein Heldenleben (A Hero’s Life) is a musical biography, depicting bravery, struggle and romance.

Concessions:
The Clarice lobby concession bar Encore will be open for beverage and snack sales.

This year's National Orchestral Institute + Festival is Pay What You Wish.

The recommended price for this event is $30; minimum ticket price is $5.