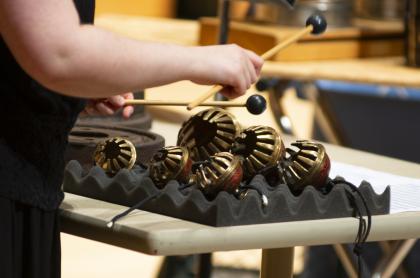 Please note: The livestream for this event will only be available to view during the performance. The video will not be available afterwards.

Join the UMD Percussion Ensemble for its season debut concert of classical and contemporary percussion music under the direction of new faculty member Ji Su Jung.

Extremes
Jason Treuting (b. 1977)
Table Music
Thierry De Mey (b. 1956)
Kembang Suling
Gareth Farr (b. 1968)
INTERMISSION
Rebonds B
Iannis Xenakis (1922–2001)
“Prelude” from Cello Suite No. 5 in C minor, BWV 1011
J.S Bach (1685–1750)
Cactus Road
Matthew Lorick (b. 1989)
“Above” from Seaborne
Garth Neustadter (b. 1986)
PROGRAM NOTES
Seaborne
GARTH NEUSTADTER
Born May 4, 1986, Green Bay, Wisconsin
This thirty minute work for six percussionists and video projection is at the nexus of the percussive art soundscape and the visual celebration of our endangered oceans. Just as rhythm and the percussive voice are the heartbeat of music, our precious oceans are the lifeblood of the planet and thus our very existence. Seaborne awakens sensibilities in the listener/viewer to both the importance and beauty that our oceans possess. For this project, the Collective’s Artistic Director Robert van Sice brought together two extraordinary young talents: Emmy Award-winning composer Garth Neustadter and water lensman Kjell van Sice. Neustadter’s mastery of cinematic composition and Kjell van Sice’s poetic aquatic images produce a powerful collaboration. The piece is designed to be the sister piece to one of the seminal pieces in the percussion repertoire, Steve Reich’s iconic Sextet.
The composer writes:
“This work explores our perception and perspectives of water from aerial, surface, and underwater vantage points. Water possesses an inherent motion and rhythm, and I am interested in reflecting the tension between the potential and kinetic energies we observe, as well as our perception of time. Musically, my language attempts to find a balance between gestures that feel almost primal or ancient juxtaposed against more modern and familiar textures. Often, motifs are introduced in simple ensemble unisons, gradually developing and evolving in ways that might emulate a communal improvisatory experience. Overall, I attempt to create a strong synergy and synesthesia with the photography, in that our perception of color and light is strongly reflected in the music throughout.”
— Garth Neustadter
The filmmaker writes:
“The conceptual core for the visual element of this piece is to give the audience, in thirty minutes, a redefining experience of a subject normally typified by the uni-dimensional horizon as an environment that cohabits the spaces of three distinct perspectives: aerial, surface and underwater. It is an invitation not only to see the ocean’s incredible beauty and raw potency, but also an opportunity to consider how the place from which we look determines what it is we see. Although the surface layer of water is thinner than a hair, the way in which it interacts with light and the forces of wind and currents make it the most dynamic and ever-changing natural phenomenon. I have always been fascinated with this singular simplicity of substance acting under constant redefinition. Sound, like a wave through water, is a burst of energy traveling in a medium. The only difference is that one is in the ocean and the other a concert hall, destined for our interpretation. This piece draws parallels between what the audience hears and sees, combining to become an emotional experience that goes far beyond the music or visuals on their own.”
— Kjell van Sice 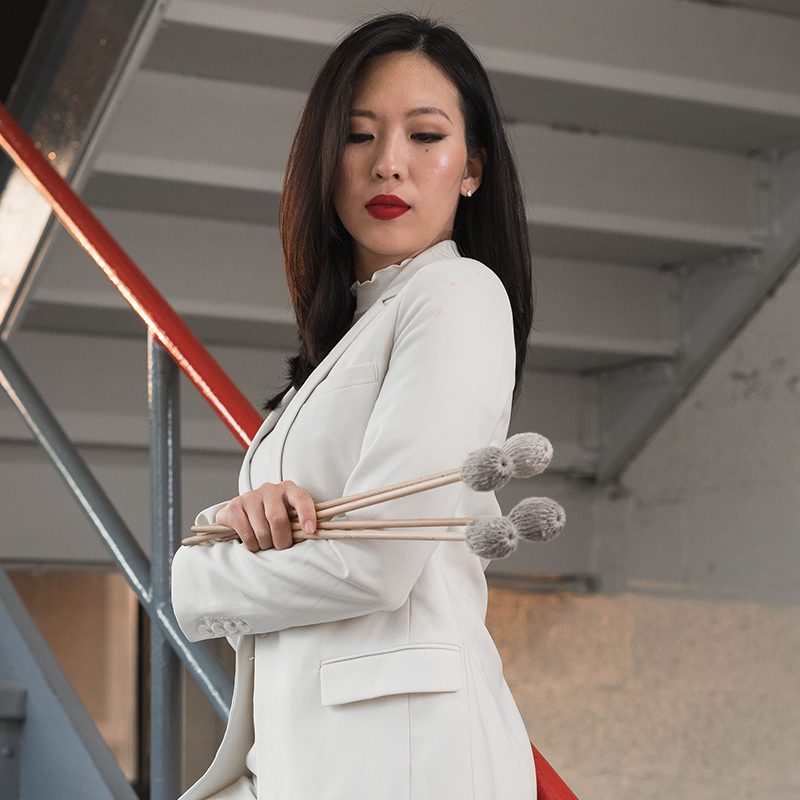 Percussion soloist Ji Su Jung has a distinctive voice that is instantly recognizable for its lyricism and sincerity. Her artistic breadth carries her with equal ease from the solo marimba medium to multiple percussion solos and European theatrical performance pieces. Born in South Korea, Jung is a rarity in the world of percussion having begun her studies at the age of four. Her exceptional talent was recognized early on and led to recitals and concerto performances at such a young age that she needed a small platform to stand upon just to reach the keyboard of the instrument. That platform was soon left behind as her stature and musical voice matured and numerous solo performances throughout her native country followed. In 2011, she moved to the United States, where she completed her undergraduate studies at the Peabody Institute of the Johns Hopkins University thanks to a generous grant from The Brookby Foundation in Wisconsin. She later received her masters and artist diploma from the Yale School of Music under the tutelage of famed percussionist Robert van Sice.
Her exceptional potential quickly blossomed into professional success, leading to concerto performances with the Baltimore Symphony Orchestra, Aspen Festival Orchestra, Houston Symphony, the Romanian Symphony Orchestra, the Grand Rapids Symphony and the Windsor Symphony in Canada. Recitals across America have won over new audiences for the marimba, and her appearance at the Kennedy Center in Washington, D.C. resulted in an unexpected invitation to join the faculty at The Peabody Institute of Johns Hopkins University. Jung was the first percussionist in 26 years to win the First Prize at the 2018 Ima Hogg Competition of the Houston Symphony, where she also garnered the Audience Choice Award. NPR radio host Fred Childs invited her to be a young artist in residence on his nationally syndicated program Performance Today. During her week with him in Minneapolis, she performed many of the seminal pieces in the marimba repertoire, introducing the instrument to listeners in every corner of the country. Her concert for children while in Minnesota was highly successful, demonstrating Jung’s love for bringing classical music to young audiences. Jung has presented masterclasses at the Curtis Institute of Music, New York University, the Shepherd School of Music at Rice University and the Beijing Conservatory in China. In 2015, she was a laureate at the renowned International Marimba Competition in Linz, Austria.
As the repertoire for marimba in mixed ensemble is growing rapidly, Jung has become an active chamber musician alongside her solo concerts. She spent a summer at the Yellow Barn Chamber Music Festival, where she played with many of today’s greatest chamber musicians, including legendary pianist Gilbert Kalish and Roger Tapping, formerly of the Takács String Quartet. The following year, she appeared at the Norfolk Chamber Music Festival in Connecticut, giving the world premieres of small ensemble pieces from today’s finest emerging composers. Since 2018, Jung has performed as a member of the spectacular Percussion Collective, an all-star collection of young percussionists performing concertos and recitals in major concert venues around the world.
The Vic Firth mallet and drumstick company has made numerous performance videos of Jung that have garnered close to a million views on their website. Through this medium, her lyrical approach to the marimba and solo percussion has drawn accolades throughout the world from composers and percussionists alike.
ENSEMBLE PERSONNEL
University of Maryland Percussion Ensemble
Ensemble Director
Ji Su Jung
Percussion
Devon Rafanelli
Maia Foley
Erica Spear
Jason Amis
Jonathan Monk
Bruce Perry
Chris Boxall
Kyle Graham
John Plate
Thomas Glowacki
Piano
Leili Asanbekova
Guzal Isametdinova
Archived Event

This in-person event will also be livestreamed.  If you are unable to travel to The Clarice, we invite you to access the livestream here.