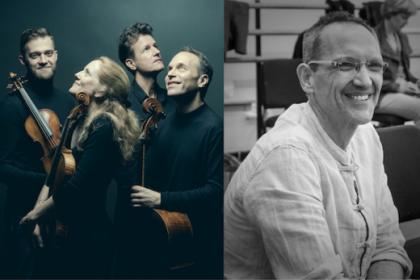 Photo by Marco Borggreve & Courtesy of the Artist.
Special Announcement:

Virtual ticketholders will not have access to watch the livestream after the event.

The St. Lawrence String Quartet is regretfully unable to perform tonight due to a positive COVID-19 test by a member of the ensemble. The Thalea Quartet, originally scheduled to appear alongside St. Lawrence, will be leading a modified program.

The Clarice is committed to creating extensive opportunities for our campus and community to engage with Visiting Artists throughout the season. During their time at UMD, members of the St. Lawrence String Quartet and composer Osvaldo Golijov will have engaged in:

A sound that has just about everything one wants from a quartet, most notably precision, warmth and an electricity that conveys the excitement of playing whatever is on their stands at the moment.”

“Modern,” “dramatic,” “superb,” “wickedly attentive,” “with a hint of rock 'n roll energy” are just a few ways critics describe the musical phenomenon that is the St. Lawrence String Quartet (SLSQ). The Quartet is renowned for the intensity of its performances, its breadth of repertoire and its commitment to concert experiences that are at once intellectually exciting and emotionally alive.

Established in Toronto in 1989, SLSQ quickly earned acclaim at top international chamber music competitions and was soon playing hundreds of concerts per year worldwide. It established an ongoing residency at Spoleto Festival USA, made prize-winning recordings for EMI of music by Schumann, Tchaikovsky and Golijov, earning two Grammy nominations and a host of other prizes before being appointed ensemble-in-residence at Stanford University in 1998.

At Stanford, SLSQ is at the forefront of intellectual life on campus. It directs the music department's chamber music program and frequently collaborates with other departments including the Schools of Law, Medicine, Business and Education. The Quartet frequently performs at Stanford Live, hosts an annual chamber music seminar attracting musicians from all over the world and runs the Emerging String Quartet Program through which they mentor the next generation of young chamber musicians.

The Quartet is especially dedicated to the music of Haydn, recording his groundbreaking set of six Op. 20 quartets for a free, universal release online as well as for purchase on compact disc and high quality vinyl. According to The New Yorker, "...no other North American quartet plays the music of Haydn with more intelligence, expressivity, and force..."

SLSQ is thrilled to announce a new creation and a unique collaborative venture for the 2021-22 season: an octet for strings by the renowned composer Osvaldo Golijov. The new work offers presenters an opportunity to foster an unusual collaboration and connection between the St. Lawrence and four locally based “solo" string players (two violins, viola, cello), who may in fact be soloists, orchestral section leaders, or exceptionally talented conservatory or university students. In Golijov’s own words, the work will "explore the dimensions opened by combining an organism with its own breathing and metabolism, like a string quartet, (especially one that is "mature" as SLSQ) together with four individual players that come to orbit, interact, and disrupt this organism.”

In recent years, the St. Lawrence has collaborated with Michael Tilson Thomas and the SF Symphony, Gustavo Dudamel and the LA Philharmonic and Marin Alsop and the Baltimore Symphony in John Adams's Absolute Jest for string quartet and orchestra. Fiercely committed to collaboration with living composers, SLSQ's fruitful partnership with Adams, Golijov, Jonathan Berger and many others has yielded some of the finest additions to contemporary quartet literature.

Geoff Nuttall (violin) and Lesley Robertson (viola) met as students while studying music in their native Canada and in 1989 founded  the St. Lawrence String Quartet. Christopher Costanza (cello) joined the ensemble in 2003 after performing for many years with the Chicago String Quartet. Owen Dalby (violin) is a founding member of Decoda, the Affiliate Ensemble of Carnegie Hall. He joined the SLSQ in 2015.

Osvaldo Golijov grew up in an Eastern European Jewish household in La Plata, Argentina. Born to a piano teacher mother and physician father, Golijov was raised surrounded by classical chamber music, Jewish liturgical and klezmer music and the new tango of Astor Piazzolla. His blending of genres and seamless integration of voices speak volumes about his approach and style, a musical language that can only be termed “Golijovian.”

Since the early 1990s, Golijov has enjoyed collaborations with some of the world’s leading chamber music ensembles such as the Kronos Quartet and the St. Lawrence String Quartet, in addition to relationships with artists such as Yo-Yo Ma, Dawn Upshaw and Robert Spano. In 2000, the premiere of Golijov's La Pasión según San Marcos (St. Mark Passion) took the music world by storm. The Boston Globe called it "the first indisputably great composition of the 21st century.” Golijov has also received acclaim for other groundbreaking works such as his opera Ainadamar and the clarinet quintet The Dreams and Prayers of Isaac the Blind, as well as music he has written for the films of Francis Ford Coppola. Fall 2021 sees the world premiere of Golijov’s latest work, Um Dia Bom, for string quartet Brooklyn Rider, presented by the Celebrity Series of Boston. Other recent works include Hebraische Milonga for cello and piano, premiered at the Spoleto Festival in 2021 by cellist Alisa Weilerstein and pianist Inon Barnatan, and an 80-minute song cycle, Falling Out of Time, based on the novel by the same name by David Grossman. The SilkRoad Ensemble and vocalists Wu Tong, Nora Fischer and Biella da Costa premiered Falling Out of Time in 2019 and bring it to Carnegie Hall in May 2022.

Golijov served as the Debs Composer’s Chair at Carnegie Hall during the 2012–13 season. He is Loyola Professor of Music at College of the Holy Cross in Worcester, MA, where he has taught since 1991.

The Thalea String Quartet brings their signature vibrancy and emotional commitment to dynamic performances that reflect the past, present and the future of the string quartet repertoire while celebrating diverse musical traditions from around the world. Fueled by the belief that chamber music is a powerful force for building community and human connection, the Thalea String Quartet has performed across North America, Europe and China, and has appeared at the Kennedy Center, Massey Hall and Weill Hall at Carnegie Hall. They have shared the stage with luminaries of the chamber music world, including members of the Emerson, Borromeo and St Lawrence String Quartets, and they have performed alongside celebrated artists including Pulitzer Prize-winning composer Caroline Shaw, violist Lawrence Power, acclaimed Canadian band BADBADNOTGOOD and visionary hip hop artist Jay Electronica.

Committed to shaping and contributing to the future of the string quartet repertoire, the Thalea String Quartet has premiered dozens of new works and have collaborated on new commissions with composers including Paola Prestini, Anthony R. Green, Akshaya Avril Tucker and Tanner Porter.

Winners of the 2021 Ann Divine Educator Award from the Fischoff National Chamber Music Competition, the members of the Thalea String Quartet have been celebrated for their innovative approach to education and community engagement.

Christopher Whitley (violin) is originally from Toronto, Ontario, Canada, Kumiko Sakamoto (violin) is from Medicine Hat, Alberta, Canada; Lauren Spaulding (viola) is from San Antonio, Texas, and Titilayo Ayangade (cello) is from Cincinnati, Ohio. Christopher performs on the 1700 “Taft” Stradivari, generously on loan from the Canada Council for the Arts Musical Instrument Bank.