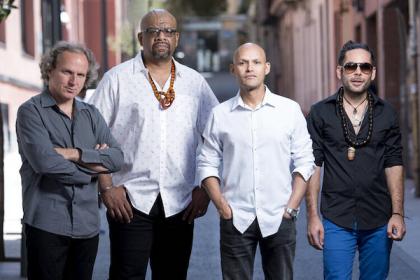 The Kogod Cabaret is back! This event features cabaret-style seating with tables for two or four people and an in-venue bar. Beer, wine and bottled water will be available for purchase. You may be seated with another party.

From bubbling rhythms and engrossing tunes to traditionally-rooted subjects and musical forms, the music of Puerto Rico native Miguel Zenón is the epitome of Latin jazz. A composer, improviser, saxophonist and MacArthur Fellow, Zenón combines the sounds of his homeland with contemporary complexity and innovation to create what the MacArthur Foundation has called “an entirely new jazz language for the 21st century.” His records are an immersive experience, animating cultural sounds such as the intoxicating plena and the centuries-old jíbara.

Zenón collaborates with his long standing quartet members, Austrian bassist Hans Glawischnig, Venezuelan pianist Luis Perdomo and Puerto Rican drummer Henry Cole. A lover of complex mathematical systems, Zenón has developed a highly specialized compositional approach shared now between the members of his band. Their music is as approachable and kinetic as it is erudite and exploratory, a relic of the social history that inspires so many of Zenón’s touchstones. On the new album “Sonero,” Zenón’s liquid alto tone and the quartet’s ensemble playing brings to life the songs of salsa singer and songwriter Ismael Rivera, pulling regional influences into a worldwide exchange. While visiting The Clarice, Zenón will lead a Jazz Clinic and Ethnomusicology Colloquium with students of the School of Music. During the 2020–21 season he made three virtual visits to classes in the School of Music.

The program will be announced from the stage.

The performance will be approximately 1 hour and 10 minutes with no intermission.

The Clarice is committed to creating extensive opportunities for our campus and community to engage with Visiting Artists throughout the season. During their time at UMD, members of The Crossing will have engaged in:

“This musician and composer is at once reestablishing the artistic, cultural, and social tradition of jazz while creating an entirely new jazz language for the 21st century.”

Multiple Grammy Nominee and Guggenheim and MacArthur Fellow Miguel Zenón represents a select group of musicians who have masterfully balanced and blended the often-contradictory poles of innovation and tradition. Widely considered as one of the most groundbreaking and influential saxophonists of his generation, he has also developed a unique voice as a composer and as a conceptualist, concentrating his efforts on perfecting a fine mix between Latin American Folkloric Music and Jazz.

As a composer he has been commissioned by SFJAZZ, The New York State Council for the Arts, Chamber Music America, NYO JAZZ, The Logan Center for The Arts, The Hyde Park Jazz Festival, The John Simon Guggenheim Foundation, MIT, Jazz Reach, Peak Performances, PRISM Quartet and many of his peers.

His biography would not be complete without discussing his role as an educator. In 2003, he was chosen by the Kennedy Center to teach and perform in West Africa as part of their Jazz Ambassador program. Since then, he has given hundreds of lectures and masterclasses and has taught all over the world at institutions which include: The Banff Centre, Berklee College of Music, Siena Jazz, Universidad Veracruzana, Conservatorium Van Amsterdam, Musik Akademie Basel, Conservatoire de Paris, University of Manitoba, Conservatorio de Música de Puerto Rico, Manhattan School of Music, San Francisco Conservatory of Music, Columbia University, Princeton University, The Kimmel Center, UMass-Amherst and the Brubeck Institute. He is also a permanent faculty member at New England Conservatory of Music. But perhaps what best reflects his commitment to education and cements his growing reputation as a "cultural ambassador", is a program that he founded in 2011, called Caravana Cultural.

The main purpose of Caravana Cultural is to present free-of-charge Jazz concerts in rural areas of Puerto Rico. The program makes a "cultural investment" in the Island by giving these communities a chance to listen to jazz of the highest caliber (Zenón invites some of the best musicians in the New York jazz scene to perform as guests), while at the same time getting young Puerto Rican musicians actively involved in the concert activities. Since February 2011, Zenón has presented a concert every four to six months. Each concert focuses on the music of a specific jazz legend (Charlie Parker, Miles Davis, Duke Ellington, among others) and is preceded by a pre-concert presentation which touches on the basic elements of jazz and improvisation. Since 2005 Zenón has also personally organized "Jazz Jam Sessions" in the area of San Juan, as a way of creating a platform for younger jazz musicians to grow and interact with one another.

In 2008 he was selected as one of 25 distinguished individuals to receive the prestigious and coveted MacArthur Fellowship, more commonly known as the "Genius Grant”.

Zenón lives in New York City with his wife Elga and their daughter.