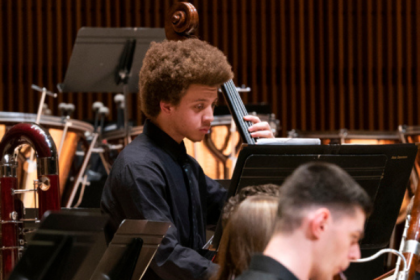 Initially titled Lament, George Walker’s Lyric for Strings is an impactfully poignant piece with a notable history that continues to resonate with audiences. Walker wrote the work as an elegy to his late grandmother and a testimony to her experience as an enslaved woman. In the face of racial discrimination and social injustice, Walker was a pioneer, becoming the first African American composer to win the Pulitzer Prize for Music. UMD wind conducting alum Lucia Disano D.M.A. '21 has transcribed the work for winds so that Walker’s masterpiece can be experienced in a new way.

The concert will also spotlight Ingolf Dahl’s Sinfonietta and a workshop of a piece still in development by guest composer Clarice Assad. This new work by Assad is commissioned by the UMD Wind Orchestra for its February 2023 performance by invitation at the College Band Directors National Association (CBDNA) National Conference. The piece is a response to Igor Stravinsky’s The Rite of Spring from the point of view of the sacrificial maiden.