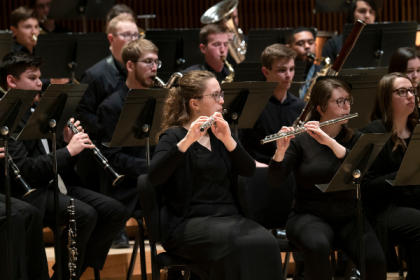 Bounding with wit and excitement, German composer Paul Hindemith’s Symphonic Metamorphosis is based on musical themes written by Carl Maria von Weber. This vibrant work was an immediate hit with American audiences when it premiered in 1944, and it remains so today.

Imani Winds will be the featured guest quintet for Nancy Galbraith’s Concerto for Woodwind Quintet and Wind Ensemble. Presented by The Clarice’s Visiting Artists Program, Imani Winds will also perform its own concert on Sunday, October 2 in addition to this collaboration and other educational engagements with the UMD School of Music.

The program will also include Bohuslav Martinu’s Memorial for Lidice.

This engagement of Imani Winds  is made possible through the ArtsCONNECT program of Mid Atlantic Arts with support from the National Endowment for the Arts. It is also supported in part by the Maryland State Arts Council and The Morris & Gwendolyn Cafritz Foundation.