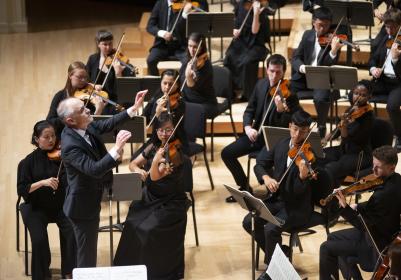 Majestic and lyrical while also contemplative and somber, Antonín Dvořák’s Cello Concerto in B minor was written as a tribute to Dvořák’s first love, who was gravely ill and passed away while Dvořák was still composing. In her memory, he included the melody of his song Leave Me Alone in My Fond Dream, a particular favorite of hers. This masterwork will feature UMD Associate Professor Eric Kutz on cello.

Prayer, by Canadian composer Vivian Fung, was first recorded as a video by the CBC Virtual Orchestra, comprising members of 28 Canadian orchestras and led by Yannick Nezet-Seguin during the COVID-19 lockdown in 2020. Fung wrote: “Prayer is, in essence, an aberration, for under no other circumstance in the past (or probably in the future) have I worn my heart on my sleeve as transparently as I have with this piece.”

The program will also include Richard Strauss’ Don Juan, a tone poem based on the Byron poem. As in Mozart's opera, things end badly for the thoughtless Don.