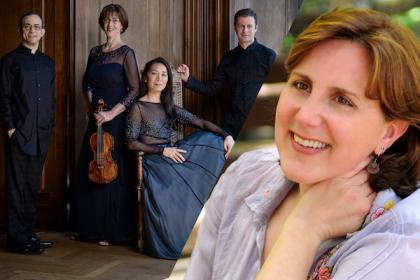 Since forming at The Juilliard School in 1992, The Brentano String Quartet has recorded numerous gold-standard performances of Schubert, Mozart, Beethoven, Brahms and Haydn. Named for the supposed “Immortal Beloved” of a mysterious Beethoven love letter, Brentano has won prestigious awards including the first Cleveland Quartet Award and the Naumburg Chamber Music Award. Described as “brilliant, virtuosic, and still mellow” (Los Angeles Times), these dynamos treat masterpieces with reverence and enthusiasm, rendering performances with equal passion and precision.

A crucial note of distinction for Brentano has been a sharp eye for cohesive if counterintuitive programs. The quartet is prone to surprise, often placing the work of relatively unknown composers with the likes of Brahms and Mozart. Their latest project, a monodrama for quartet and voice called Dido Reimagined, was composed by Pulitzer-winning composer Melinda Wagner and librettist Stephanie Fleischmann in collaboration with soprano Dawn Upshaw. MacArthur Foundation and American Academy of Arts & Sciences Fellow and five-time Grammy Award winner, Dawn’s natural warmth and communicative power has earned acclaim across repertoire on operatic and concert stages and has solidified partnerships with many of today’s greatest composers and ensembles, including Gilbert Kalish, the Kronos Quartet and Esa-Pekka Salonen. While visiting The Clarice, Dawn Upshaw will lead a masterclass for School of Music student vocalists, Brentano Quartet will visit the Chamber Music class and host a Composer Colloquium and the ensemble will lead a pre-concert talk.

Pay What You Wish: