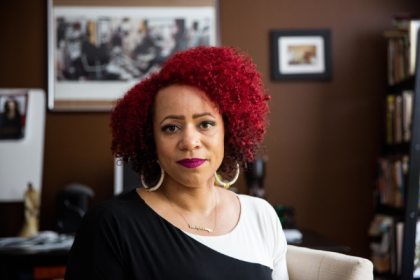 Please plan to arrive early. A ticket reservation does not guarantee a seat.

Presented By:
UMD College of Arts and Humanities
Colvin Institute of Real Estate Development at the School of Architecture, Planning and Preservation
HAND
Accessibility:

The College of Arts and Humanities, the Colvin Institute of Real Estate Development at the School of Architecture, Planning and Preservation and HAND present:

A Conversation about Truth, History and the 1619 Project

For her final Dean’s Lecture Series as dean of UMD’s College of Arts and Humanities, Bonnie Thornton Dill will be in conversation with Pulitzer Prize-winning journalist Nikole Hannah-Jones, the creator of the groundbreaking 1619 Project, published by The New York Times Magazine. An exploration of the legacy of slavery starting with the arrival of the first enslaved Africans to Virginia in 1619, the project reframes U.S. history by “placing the consequences of slavery and the contributions of Black Americans at the very center of our national narrative.” Thornton Dill and Hannah-Jones will discuss the hard but essential work of engaging the public to reflect on history—and the power of such efforts to illuminate the present. Hannah-Jones has spent her career investigating racial inequality and injustice. In 2020 she was inducted into the Society of American Historians, and in 2021 she was named a member of the American Academy of Arts and Sciences. She also serves as the inaugural Knight Chair in Race and Journalism at Howard University, where she is founding the Center for Journalism and Democracy. The discussion will be followed by a Q&A.

The event is free and open to students, staff, faculty and the community with limited availability.

NIKOLE HANNAH-JONES is the Pulitzer Prize-winning creator of the 1619 Project and a staff  writer at The New York Times Magazine. She has spent her career investigating racial inequality  and injustice, and her reporting has earned her the MacArthur Fellowship, commonly known as the “Genius  Grant,” a Peabody Award, two George Polk Awards and the National Magazine Award three  times. Hannah-Jones also earned the John Chancellor Award for Distinguished Journalism and  was named Journalist of the Year by the National Association of Black Journalists and the  Newswomen's Club of New York. In 2020 she was inducted into the Society of American  Historians and in 2021 she was named a member of the American Academy of Arts & Sciences.  She also serves as the Knight Chair of Race and Journalism at Howard University, where she is  founding the Center for Journalism & Democracy.

ABOUT BONNIE THORNTON DILL
DEAN, COLLEGE OF ARTS AND HUMANITIES

Bonnie Thornton Dill was appointed dean of the University of Maryland’s College of Arts and Humanities in 2011. She joined the university in 1991 as professor and served as chair of the women’s studies department for eight years. As dean, Thornton Dill has worked to increase support for and the visibility of arts and humanities research and scholarship; provide leadership for interdisciplinary initiatives within the college and across the campus; support student engagement with underserved communities; and increase the number of UMD’s national scholarship award recipients. A pioneering scholar on the intersections of race, class and gender in the U.S. with an emphasis on African-American women, work and families, she is founding director of both the Center for Research on Women at the University of Memphis and the Consortium on Race, Gender, and Ethnicity at UMD. Her scholarship includes three books and numerous articles. She is former president of the National Women’s Studies Association; former vice president of the American Sociological Association; and former chair of the Committee of Scholars for Ms. magazine. She earned her doctoral and master’s degrees in sociology and human relations, respectively, from New York University and her bachelor’s degree in English from the University of Rochester.

ABOUT THE COLVIN INSTITUTE OF REAL ESTATE DEVELOPMENT

HAND is a nonprofit membership collective comprised of over 450 institutions working across the private, public and social sectors to collaborate in the production and preservation of affordable housing in the Capital Region of Baltimore, Washington and Richmond. Representing the ecosystem of partners who collaborate in bringing equitable communities to fruition, HAND works to disrupt the systems that perpetuate inequity in the communities we serve. We do this by embedding racial equity into our operations, practices and programming, and activating our membership through policy forums and advocacy designed to drive impact for Black and brown communities residing at the sharpest intersections of inequity.

This event is also co-sponsored by the following: