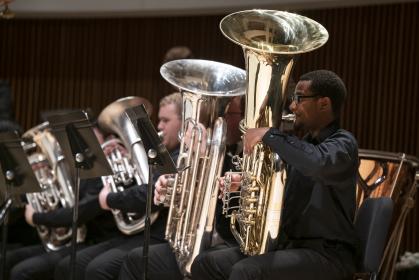 The UMD Wind Ensemble performs a varied program with musical selections representative of stories and songs. Faculty member Willie Clark will be the tuba soloist on Bruce Broughton's Tuba Concerto.

About the UMD Wind Ensemble (UMWE):
Under the direction of Andrea Brown, UMWE performs works from the most respected repertoire written for wind band and chamber ensembles with a focus on highlighting composers from underrepresented populations.

A note from the music director:

Tonight we bring to the stage a collection of pieces evoking the musical expression of "Stories and Songs." Music at its most basic form, is a means of human communication. Whether it's an emotion, idea or a particular narrative, music undeniably can be a powerful vehicle for expression. Included in our program this evening, we have two works by Bruce Broughton—a name synonymous with some of the most popular music included in telling the stories of Hollywood's silver screen. We are grateful to our new UMD colleague, Lecturer Willie Clark, for joining us for tonight's performance of Broughton's Tuba Concerto. From the pair of Grainger songs, the story of Pandora and her box, to the image of Einstein enjoying the nightlife of Austin, TX, we hope you'll enjoy this evening of musical song and storytelling.

Ralph (pronounced Raphe) Vaughan Williams was born in 1872 at Down Ampney, on the borders of Gloucestershire and Wiltshire. His creative life as a composer spanned almost six decades—from the song Linden Lee of 1901 to the Symphony No. 9, composed in 1958 at age 85. During that time he wrote approximately 250 works for voice, instruments and stage. Although justifiably credited for his role in the 20th century revival of English music, his compositions have a personal message for people in every country. His music is neither conservative nor radical; it overlaps both time and category. Listeners are rarely concerned about analyzing his music; they listen and are moved.

Vaughn Williams composed a large number of choral works, including five operas, as well as chamber music, nine symphonies and concertos for oboe, tuba, violin and piano. He also wrote music for films, published a number of essays on musical subjects and in later years was a respected radio broadcaster. Fantasia on a Theme by Thomas Tallis for strings; A London Symphony; and Fantasia on a Greensleeves for flute, harp, piano and strings remain among his most popular works. His English Folk Song Suite and Toccata Marziale, both published in 1924, have become wind band classics, and are widely performed as transcriptions for orchestra.

— Bio from Program Notes for Band

As a child Percy Grainger studied piano with his mother and later with Louis Pabst (a pupil of Anton Rubinstein) and Adelaide Burkitt in Melbourne. At the age of ten he began a series of recitals which financed his study with James Kwarst in Frankfurt, Germany, in 1894. In 1903, he took a few lessons with Feruccio Busoni. In 1900, Granger began his career as a concert pianist with sensational success in such widely separated places as England, Australia and South Africa. His playing so impressed Edvard Grieg in 1906 that he was invited to the composer's home in Norway. During the summer of 1907, they rehearsed Grieg's Concerto for the Leeds Festival, but the Nordic composer died before the performance. Grainger later became known as one of the concerto's great interpreters. He immigrated to America in 1914, winning acclaim for his playing. At the outbreak of World War I, he enlisted as an army bandsman learning to play and appreciate most of the wind and percussion instruments—particularly the saxophone.

As a composer, Grainger was remarkably innovative, using irregular rhythms before Stravinsky did, pioneering in folk music collections at the same time as Barok, writing random music in 1905 and predating Varese in experimentation with electronic music. He composed, set, arranged and edited some 400 works; counting all the versions of these works, the number exceeds 1000.

— Bio from Program Notes for Band

Grainger used no traditional tunes in this piece which was written for and about the people in his native Australia. He expressed the wish to “voice a certain kind of emotion that seems to me not untypical of native-born colonials in general.” Concerning colonials he wrote the following: “Perhaps it is not unnatural that people living more or less alone in vast virgin countries and struggling against natural and climatic hardships (rather than against the more actively and dramatically exciting counter-wills of their fellow men, as in more thickly populated lands) should run largely to that patiently yearning, inactive sentimental wistfulness that we find so touchingly expressed in much American art; for instance in Mark Twain’s Huckleberry Finn, and in Stephen Foster’s songs. I have also noticed curious, almost Italian-like, musical tendencies in brass band performances and ways of singin in Australia (such as a preference for richness and intensity of tone and soulful breadth of phrasing over more subtly and sensitively varied delicacies of expression) which are also reflected here.”

This event will be performed in the Dekelboum Concert Hall.  If you are unable to join us in person, we invite you to watch the livestream here.