Speaking of Sisters with Transistors: Screening and Discussion

Speaking of Sisters with Transistors 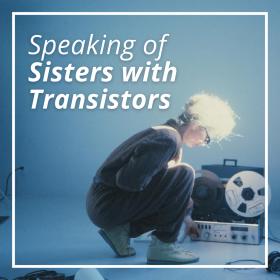 Join us for an online event featuring a screening of Sisters With Transistors, a documentary film on female pioneers of electronic music and a moderated discussion on the documentary and its subjects.

The event will be open to the public with reservations. The screening and moderated discussion will occur over Zoom.

Lisa Rovner is a French-American filmmaker and artist living in London who's currently making her first feature documentary supported by the BFI. Sisters with Transistors is the remarkable story of the female pioneers in electronic music whose radical 20th Century experiments redefined the boundaries of music.

Suzanne Ciani is a five-time Grammy award-nominated composer, electronic music pioneer, and neo-classical recording artist who has released over 20 solo albums including "Seven Waves," and "The Velocity of Love," along with a landmark quad LP “LIVE Quadraphonic,” which restarted her Buchla modular performances. Her work has been featured in films, games, and countless commercials as well.

Dr. Tara Rodgers (Analog Tara) is a multi-instrumentalist composer and historian. She is the author of numerous essays on sound and synthesizers, and of Pink Noises: Women on Electronic Music and Sound (Duke University Press, 2010), an award-winning book noted as “a modern mainstay of feminist electronic music discourse” (NPR Music) and "an absolutely singular undertaking which has staked a claim to changing [how] we think about electronic music” (Cycling ’74). Her music, from analog techno to generative sound installations, has been presented around the U.S. and internationally.

Dr. William Robin is an assistant professor of musicology at the University of Maryland’s School of Music. He completed a Ph.D. in musicology at the University of North Carolina at Chapel Hill in 2016 with a dissertation analyzing American new music in the twenty-first century through the lens of “indie classical,” focusing on New Amsterdam Records and the ensemble yMusic. He is currently working on a book project––Industry: Bang on a Can and New Music in the Marketplace (under contract with Oxford University Press––on the composer collective Bang on a Can and their participation in major institutional shifts in contemporary music in the 1980s and 1990s.

Register via Zoom. Registered attendees will receive via email a link to join the event on Zoom.