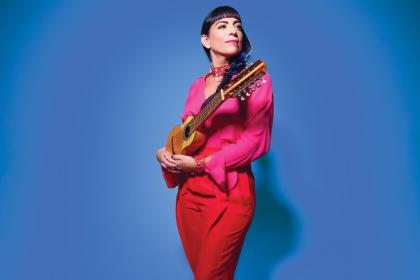 Livestream ticket holders will have access to view the stream until June 6th.

Missed the show? Call or email the ticket office (301.405.ARTS or tickets-theclarice@umd.edu) for access to the stream.

Argentinian vocalist, songwriter and producer Sofía Rei fuses the traditional music of her native Buenos Aires with the diverse soundscape of New York City, combining folk, underground punk rock, experimental music, jazz, pop and electronic music into what has been described as a, “wildly eclectic, near hallucinatory international mix” (The New York Times). Her vocal lyricism and auditory world-building through imaginative and meticulously-crafted loops make her an ambassador for folklore and futurism alike.

Sofía’s most recent musical venture, Umbral (Threshold), follows her personal journey discovering the soulful folk influences of the Elqui Valley in Chile. From her expedition, Sofía reveals her deeply authentic responses to heartbreak, deception and disappointment with unrestrained sincerity, imaginative wit and a heavy dose of sarcasm. Umbral has since received worldwide acclaim, including rankings on the top 20 albums of 2021 by NPR Alt Latino, #6 on the European World Music Charts and #1 album of the year on Mixed World Music magazine.

In her most recent project, an exhaustive exploration of the voice as an instrument of texture and expression, Sofía Rei breaks away from the established continuity of her work, creating a daring new soundscape that blends South American folk with pop, electronic music and improvisation. A soul-searching trip to the Elqui Valley in Chile Sofía, armed with only two back packs of recording equipment and her charango, she created the core of her newest musical venture: Umbral (Threshold). Her unorthodox compositions are built almost exclusively from vocal loops and incorporate the series “Cinco poemas cínicos” (Five Cynical Poems), in which the songwriter displays her natural inclination towards lyricism. Incisive and imaginative, Sofia’s poetry responds to heartbreak, deception and disappointment with unrestrained candor, elegant humor and a heavy dose of sarcasm.

In 2019, Sofia was awarded the Cafe Royal Cultural Foundation Music Production Grant, to help finish the recording of Umbral. Produced by world music luminary and long-time collaborator JC Maillard. Umbral was released in June 2021 and has been receiving raving reviews among which, The New York Times, NPR, Songlines, Rolling Stone Magazine, Flood Magazine, BBC Radio 3, Página 12, Billboard Magazine and it was included on the top 20 albums of 2021 by NPR Alt Latino, #6 on the European World Music Charts and #1 album of the year on Mixed World Music magazine.

With a voice that’s been hailed for its captivating beauty and versatility by such prestigious publications as the New York Times and DownBeat Magazine, Rei’s talents fit comfortably into any number of genres. A self-described “frog from another pond,” Rei’s natural inclination is to leap, an instinct that has taken her on a circuitous route from early classical training and Argentinean folk music through the punk rock nightlife of Buenos Aires, into some of the most prestigious venues in the U.S. and on to a wealth of festival stages around the world. Rei has been named “an ambassador of Latin America’s experimental voice in the contemporary international circuit”. Her frequent collaborations with John Zorn and the downtown music scene have led to 5 releases on Tzadik records and 5 independent albums under her name, which received international acclaim including a Grammy nomination and 6 Independent Music Awards. Rei has been an advocate of South American culture through her work. She is the co-founder of El Colectivo Sur, an arts collective that increases public awareness of South American arts embracing contemporary and experimental works, bringing together diverse communities. In 2019, she was presented the Spirit of Folk Award by the International Folk Alliance (Montreal), for her active involvement in the preservation, presentation, and promotion of folk music, community building, and demonstrated leadership. Rei is currently a Professor at NYU’s Clive Davis Institute and teaches New Perspectives in Latin Music, a course she created that explores rhythmic training and the broad stylistic diversity of Latin American music.

GRAMMY Award-nominated Latinx artist Sofia Rei is an ever-traveler perpetually seeking new expressions for her innate gift as a vocalist and songwriter. Produced by JC Maillard (Angelique Kidjo, Richard Bona), Rei’s latest recording, UMBRAL (Cascabelera Records; Release Date: June 4, 2021), takes her deep into the mountains of the Elqui Valley in Chile to capture intimate portrayals of a woman fighting for her place in the world. Rei set off on a solo trek across the rugged Eastern Chilean terrain with two backpacks of recording gear, and a mind overflowing with the complexities of modern life. UMBRAL results in a masterpiece steeped in folkloric tradition and digital futurism.

Classically trained and an ardent inquisitor of the intricacies of South American folk music, Rei has released five albums of John Zorn’s music on Tzadik Records and four independent recordings under her own name. Rei was among the featured artists at globalFEST 2021, which resulted in an electrifying NPR Tiny Desk (Home) Concert and subsequent photo running in Jon Pareles’ globalFEST review in The New York Times. Her role as Professor at NYU Tisch Clive Davis Institute–where she designed the “New Perspectives in Latin Music” course–places her at the forefront of uncovering the broad diversity of traditional Latin American music styles integrated with new technologies and cutting-edge trends.

Rei set off on her travels to the Elqui Province with a charango in hand ready for an uninhibited excursion to record unorthodox vocal sketches in the form of loops based on a series “Cinco Poemas Cínicos” (“Five Cynical Poems”). Incisive and imaginative, Rei’s poetry responds to heartbreak, deception, and disappointment with unrestrained candor. Her self-sufficient compositions originate from a vocal layering structure allowing each work to stand on its own.

“I’ve been hearing traces of UMBRAL in my head for years,” says Rei. “I wanted to experiment with looping machines and enter the world of sound design. The Elqui Valley was where I needed to venture and confront a well of emotions that would translate into these songs. After experimenting with different formats from solo to full band settings, I realized that my longtime collaborator JC Maillard was the perfect person to take this project further and to fully develop it the way I envisioned. Maillard’s production style on UMBRAL is best described as combining pixels with real paintings. He utilized abstractions of feelings and took control of the ambient soundscape.”

JC Maillard adds, “The rhythmic elements on UMBRAL traverse across Latin America and really are not represented in the electronic music scene. It’s essential to respect the regional accents of all these disparate rhythms. It’s no longer about zeros and ones. My role was to keep the DNA of the groove alive and use Rei’s vocals as the bedrock, the melody, and the driving force behind everything.”

UMBRAL opens with “La Otra” (“The Other”), an ode to Gabriela Mistral–one of the most riveting poets in Latin America who was born in the Elqui Province. Mistral was the first Latin American to win a Nobel Prize in Literature. Rei discovered a book of her poetry and the beautiful poem entitled “La Otra” (“The Other,” or “The Other Woman”). The poem honed in Rei’s exact experience in the valley and her process of rebirth, and transformation. The rhythm is loosely based on a Colombian seresesé.

One of the few songs on UMBRAL in a 4/4 time signature, “Un Mismo Cielo” (“The Same Sky”) charts out the dance of two lovers who are in different hemispheres though connected by the same sky above. “Negro Sobre Blanco” (“Black on White”) describes a feeling of uneasiness – a preamble to a nervous breakdown. A solitary woman journeys searching for answers and clarity. Rei’s vocal loops and two converging lines of charango are instrumental to the construct that’s expanded on by Maillard’s genius. A mix of a huayno (an Andean musical style shared between Bolivia, Perú, Argentina, Chile, and Ecuador) and an Afro-Bolivian saya fuses with the brilliant studio work of drummer-percussionist Franco Pinna.

“La Caída” (“The Fall”) is the most intensely personal composition on UMBRAL. Rei writes it in memory of her father who suffered a consequential fall at a construction site while supervising a Brahma Beer factory. The actual fall and collapse of the superhero image she had of her father, along with a chain of unfortunate subsequent events the accident unleashed, are at the heart of “La Caída.” Rei obsessively listened to Bjork’s Vulnicura album, and its lasting influence is evident.

“Escarabajo Digital” (“Digital Beetle”) features the debut writing collaboration between Rei and Maillard. Though they’ve co-arranged albums including KETER for John Zorn, UMBRAL highlights both artists on vocals as they sing about conversations with close-ones (particularly family members) that show no signs of progress, only frustration. “La Quinta Pata” (“The Fifth Leg”) carries a hefty dose of sarcasm. It talks of people who always find the imperfection, the wrong detail, or the defect in somebody or in a situation. A common phrase in Spanish refers to this person as only looking for the fifth leg in a cat.

Rei initially recorded the complex-metered bass line of “Helvética 12” with other vocal loops on her harmonizer at the Elqui Valley, though her rap came later while poolside on tour in Florida. Rei says, “My friend Tupac and I were talking about relationships and at some point, I said, ‘you know, there is one thing I can’t stand of a guy: spelling mistakes! If I have to explain to him how to spell...then I am done!’ We couldn’t stop laughing!” The impetus of the lyrics are of a failed love story where Rei receives a disappointing email by somebody that not only makes significant spelling mistakes, but also bores her to death with his use of the Helvetica 12 font. Two of her favorite musical partners, Jorge Roeder on bass and Leo Genovese on piano and synthesizers, brought their magic to the track.