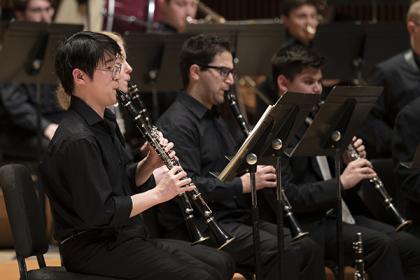 Known as “Shadow Catcher” by some of the Native Americans that he photographed in the early 1900s, Edward Curtis took more than 40,000 images documenting the daily lives and traditions of over 80 tribes across North America. A concerto for brass quintet, Eric Ewazen’s Shadowcatcher was inspired by four of these photographs that focus on the Tewa, Chippewa, Navajo and Kwakiutl nations. This work features four corresponding movements titled “Offering to the Sun,” “Among the Aspens,” “The Vanishing Race” and “Dancing to Restore an Eclipsed Moon.” The concert will also include pieces by J.S. Bach, Esther Ballou and Johannes Brahms.

About the UMD Wind Orchestra (UMWO):
Led by Michael Votta, Jr., UMWO is a leading voice among collegiate ensembles in premiering new works for winds. This season’s engaging performances will feature faculty soloists and world premieres of new works and masterworks of the 20th and 21st centuries.

Pay What You Wish