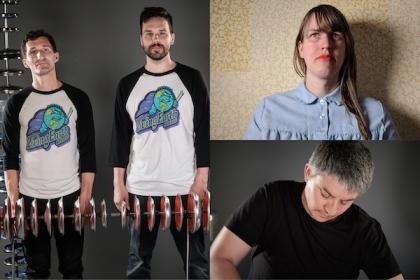 The livestream link for this performance will be available to ticket holders for viewing until January 4. To access the link, please contact the ticket office at 301.405.ARTS or tickets-theclarice@umd.edu.

A Kind of Ache is a multimedia installation and concert from composer Sarah Hennies, sculptor and conceptual artist Terry Berlier and electroacoustic duo The Living Earth Show (Andy Meyerson and Travis Andrews) that reimagines a world designed from and for a queer identity. The drums-and-guitar duo will play Hennies’ score on Berlier’s sculptures, using objects, music and their imaginations to wonder “What would it feel like to be the majority?”

The Living Earth Show supports the next generation of artistic thinkers throughout their work.  During the 2020-21 season and throughout the pandemic, they worked closely with UMD School of Music students in the creation of Music for Hard Times. The eight-week virtual project featured 70 UMD Wind Orchestra students in an open source composition that can never be replicated. During their 2021-22 residency at The Clarice, The Living Earth Show will continue to collaborate with UMD students in the making of a safe artistic space for queer-identifying individuals. They will host an Arts Citizenship Talk (ACTnow) and share their creative process with audiences.

The Clarice is committed to creating extensive opportunities for our campus and community to engage with Visiting Artists throughout the season. During their time at UMD, members of The Living Earth Show, Sarah Hennies and Terry Berlier will have engaged in:

Now in their eleventh year of “outstanding” (San Francisco Chronicle) and “transcendent” (Charleston City Paper) performances, The Living Earth Show–guitarist Travis Andrews and percussionist Andy Meyerson–is a megaphone and canvas for the world’s most progressive artists. One of the premiere contemporary chamber ensembles in the United States, The Living Earth Show exists to push the boundaries of technical and artistic possibility while amplifying voices, perspectives, and bodies that the classical music tradition has often excluded. The organization uses the tools of experimental classical music to foreground BIPOC and LGBTQ+ artists, facilitating the creation of their most ambitious musical visions and creating work that reflects and responds to our world.

Based in San Francisco, The Living Earth Show has presented seasons of commissioned multimedia productions since 2011, working with dance companies, visual artists, sculptors, poets, and other musicians to craft compelling, immersive, California-centric productions.

Committed to supporting the next generation of artistic thinkers, The Living Earth Show has been in residence at the Music Department at Stanford University (2019), the University of Michigan Center for World Performance Studies (2019), University of California Davis (2018), and University of South Carolina (2018).

The Living Earth Show has released three critically acclaimed albums: M. Lamar’s Lordship & Bondage: The Birth of the Negro Superman (2019), Dance Music (2016) and High Art (2013). Upcoming albums in 2021 include Samuel Adams’ Lyra, Sahba Aminkia’s Shahnameh: Book of Kings, Sarah Hennies and Terry Berlier’s A Kind of Ache and the debut album by COMMANDO: a nü metal project organized by The Living Earth Show foregrounding some of the most legendary LGBTQIA POC rappers, singers, yellers and rockers in the country.

Sarah Hennies (b. 1979, Louisville, KY) is a composer based in upstate New York whose work is concerned with a variety of musical, sociopolitical and psychological issues including queer & trans identity, love, intimacy, psychoacoustics and percussion. She is primarily a composer of acoustic chamber music, but is also active in improvisation, film and performance art. She presents her work internationally as both a composer and percussionist with notable performances at MoMA PS1 (NYC), Monday Evening Concerts (Los Angeles), Le Guess Who (Utrecht), Festival Cable (Nantes), send + receive (Winnipeg), O’ Art Space (Milan), Cafe Oto (London), ALICE (Copenhagen) and the Edition Festival (Stockholm). As a composer, she has received commissions across a wide array of performers and ensembles including Bearthoven, Bent Duo, Cristian Alvear, Claire Chase, R. Andrew Lee, Talea Ensemble, Thin Edge New Music Collective, Two-Way Street, Nate Wooley and Yarn/Wire.

Her ground breaking audio-visual work Contralto (2017) explores transfeminine identity through the elements of “voice feminization” therapy, featuring a cast of transgender women accompanied by a dense and varied musical score for string quartet and three percussionists. The work has been in high demand since its premiere, with numerous performances taking place around North America, Europe and Australia and was one of four finalists for the 2019 Queer|Art Prize.

Sarah is currently a Visiting Assistant Professor of Music at Bard College.

Terry Berlier is an interdisciplinary artist who investigates the evolution of human interaction with queerness and ecologies. Orienting, disorienting and reorienting, her work provides tools to recover and reanimate our faltering connections with self, queerness, nature and society, often through humor.

She has exhibited in solo and group shows in North America, Europe, Asia, South America and Australia including at the Yerba Buena Center for the Arts, The Contemporary Jewish Museum in San Francisco, Contemporary Art and Spirits in Osaka, Japan, San Jose Institute of Contemporary Art and the Stanford Art Gallery. She has received numerous residencies and grants including the Center for Cultural Innovation Grant, the Zellerbach Foundation and the Arts Council Silicon Valley Artist Fellowship. Her work has been reviewed in the Art in America, BBC News Magazine and San Francisco Chronicle and is published in Seeing Gertrude Stein by Wanda Corn and Tirza Latimer through University of California Press and Slant Step Book: The Mysterious Object and The Artworks it Inspired by Francesca Wilmott and Phil Weidman. Her work is in several collections including the Kala Art Institute, University of Arizona, Tucson, Bildwechsel Archive in Berlin, Germany and Progressive Corporation. She received a Masters in Fine Arts in Studio Art from University of California, Davis and a Bachelors of Fine Arts from Miami University in Oxford, Ohio. Berlier is an Associate Professor and Director of the Sculpture Lab in the Department of Art and Art History at Stanford University.

WHAT WOULD IT FEEL LIKE TO BE THE MAJORITY?

A Kind of Ache is an installation and concert length work created by composer Sarah Hennies, visual artist Terry Berlier and TLES that deconstructs, reconstructs and queers everyday objects in the service of creating and investigating the concept and possibility of creating “queer space.” Connected by a fascination with what they term queer objects—small thrift store hand bells and mis-matched pan lids—Hennies and Berlier collaborate in bringing these percussive objects together in a new installation imagining creating and demarcating a “queer-only” space, as this environment is nearly unattainable in every day life. What, ask the collaborating artists, would it feel like to be the majority?

This work was commissioned by The Clarice Smith Performing Arts Center.