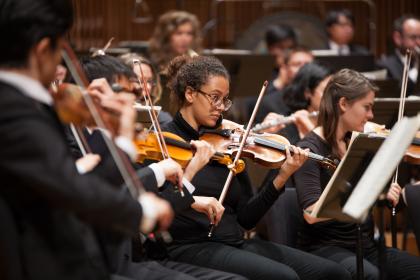 After a year and a half of not playing music together due to COVID-19, the UMD Repertoire Orchestra (UMRO) welcomes you back to the concert hall in both celebration of the unity and resiliency of America as well as in recognition of the systemic injustices faced by Black, indigenous and people of color brought more prominently to light during this time.

Chickasaw American composer Jerod Impichchaachaaha' Tate's Chokfi' is a short, energetic and fun sketch of the rabbit trickster character from Southeast American Indian legend. Korean American Jennifer Jolley's The Ferry Crossing paints a serene and placid picture of a ferry crossing on Lake Champlain, between Burlington, Vermont, and Port Kent, New York. National Orchestral Institute+Festival faculty member and composer-in-residence with the Philadelphia Orchestra Gabriela Lena Frank was born to a Peruvian/Chinese mother and Lithuanian/Jewish father. Her first orchestral work, Elegía Andina incorporates stylistic elements of Peruvian Zampoña (pan pipe) music and features two flute solos. Margaret Bonds, one of the most prominent Black American composers of the 20th century, wrote The "Montgomery" Variations as a tribute to Dr. Martin Luther King, Jr. Based on the spiritual I Want Jesus to Walk with Me, it depicts many events in Montgomery, Alabama, during the era of American Civil Rights.

About the UMD Repertoire Orchestra (UMRO):
Led by students of the graduate conducting studio, UMRO is a unique orchestra of musicians from across campus that performs four full concerts each season. Repertoire varies based on instrumentation and consists of works for both chamber and full orchestra.

Health & Safety:
There may be COVID safety policies such as mask requirements in place when you attend this event. Please see our health and safety page for the most up to date information about attendance.

The Ferry Crossing
Jennifer Jolley (b. 1981)

Chokfi’ (choke-fee) is the Chickasaw word for rabbit, who is an important trickster legend within Southeast American Indian cultures.

Inspired by a commission for youth orchestra I decided to create a character sketch that would be both fun and challenging for the kids. Different string and percussion techniques and colors represent the complicated and diabolical personality of this rabbit person.

In honor of my Muscogee Creek friends, I have incorporated a popular tribal church hymn as the melodic and musical base.

​​UMRO would like to thank Jerod for his generosity in offering this work as well as his time speaking to our students pro bono.

Ferries are a mode of transport I have never encountered until I moved to Vermont in 2003. I left California after college, and while trekking to Burlington I found a vessel that would transport me magically over the endless Lake Champlain.

And so I lived and worked in Vermont for four years, discovering snow and seasons and the wonderful people that make it a lovable and stalwart state, and I took many ferry rides during my stay there.

And then I left.

I left four years later across the ferry that traverses between Burlington and Port Kent. It was the last ferry ride I took in Vermont.

This piece is my arrival and departure from the Green Mountain State, with the horns guiding you along the way. Even though my stay there was short-lived, I miss Vermont. I miss it terribly. There may be a time in the future when I return, but until then, I can visit, riding the ferry to my destination.

Elegía Andina for Orchestra (2000) is dedicated to my older brother, Marcos Gabriel Frank. As children of a multicultural marriage (our father being Lithuanian-Jewish and our mother being Chinese-Peruvian-Spanish), our early days were filled with Oriental stir-fry cuisine, Andean nursery songs and frequent visits from our New York-bred Jewish cousins. As a young piano student, my repertoire included not only my own compositions that carried overtones from Peruvian folk music but also rags of Scott Joplin and minuets by the sons of Bach. It is probably inevitable then that as a composer and pianist today, I continue to thrive on multiculturalism. Elegía Andina (Andean Elegy) is one of my first written-down compositions to explore what it means to be of several ethnic persuasions, of several minds. It uses stylistic elements of Peruvian arca/ira zampoña panpipes (double-row panpipes, each row with its own tuning) to paint an elegiac picture of my questions. The flute part was particularly conceived with this in mind but was also inspired by the technical and musical mastery of Floyd Hebert, principal flutist of the Albany Symphony Orchestra. In addition, as already mentioned, I can think of none better to dedicate this work to than to "Babo," my big brother—for whom Perú still waits.

The Montgomery Variations is a group of freestyle variations based on the Negro spiritual theme, “I want Jesus to Walk with Me.” The treatment suggests the manner in which Bach constructed his partitas—a bold statement of the theme, followed by variations of the theme in the same key—major and minor.

Because of the personal meanings of the Negro spiritual themes, Margaret Bonds always avoids overdevelopment of the melodies.

The Montgomery Variations were written after the composer’s visit to Montgomery, Alabama, and the surrounding area in 1963.

Under the leadership of Martin Luther King, Jr. and the Southern Christian Leadership Conference, Negroes in Montgomery decided to boycott the bus company and to fight for their rights as citizens.

Truth to custom prayer meetings precedes their action. Prayer meetings start quietly with humble petitions to God. During the course of the meeting, members seized with religious fervor shout and dance. Oblivious to their fellow worshippers they exhibit their love of God and their Faith in Deliverance by gesticulation, clapping and beating their feet.

The Spirit of the Nazarene marching with them, the Negroes of Montgomery walked to their work rather than be segregated on the buses. The entire world, symbolically with them, marches.

Dixie, the home of the Camelias known as “pink perfection,” magnolias, jasmine and Spanish moss, awakened to the fact that something new was happening in the South.

V. One Sunday in the South

Children were in Sunday School learning about Jesus, the Prince of Peace. South “die-hards” planted a bomb and several children were killed.

The world was shaken by the cruelty of the Sunday School bombing. Negroes, as usual, leaned on their Jesus to carry them through this crisis of grief and humiliation.

A benign God, Father and Mother to all people, pours forth Love to His children—the good and the bad alike.

ABOUT THE MUSIC DIRECTOR

Possessing a repertoire of over 45 operas and musicals ranging from Mozart and Puccini to Rodgers and Hammerstein and Sondheim, conductor and pianist Leong is a musician of uncommon breadth and versatility. His conducting has been called “taut and assured” by Opera Today. Leong was named the 2019 Julius Rudel/Kurt Weill conducting fellow by the Kurt Weill Foundation. In this capacity, he served as associate conductor to Ted Sperling—the Tony Award-winning artistic director of MasterVoices (New York City)—on Lady in the Dark, which featured another Tony winner, Victoria Clark. Leong has served as conductor, assistant conductor and pianist at Cincinnati Opera, Pacific Opera Project, Queen City Opera, Opera Saratoga and Pittsburgh Festival Opera.

During the COVID-19 pandemic, Leong was hired at Dayton Opera and Des Moines Metro Opera before their respective performances of Going for Baroque! and Sweeney Todd were cancelled. For the latter, he served as virtual orchestra audio/video editor for their gala concert. His audio/video work can now be seen at the University of Maryland, College Park (UMD) as well as at College of Fellows of the American Theatre, Wear Yellow Proudly, Youth Music Monterey County, Unitarian Universalist Church in Reston and Bella Voce a cappella ensemble.

An enthusiastic grammarian, linguist and author, Leong has written a book entitled “La bohème: A Connotative and Grammatical Translation.” Having been described as “Nico Castel plus,” his book has been praised by singers, conductors, coaches and directors alike. His doctoral dissertation will be entitled “The Butterfly Effect: Color Conscious Casting in the 21st Century.”

This in-person event will also be livestreamed. If you are unable to travel to The Clarice, we invite you to access the livestream here.