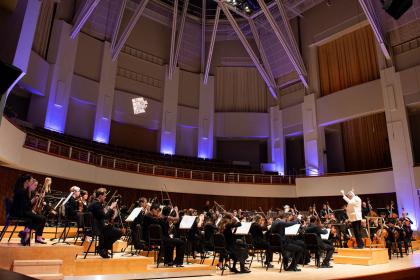 PLEASE NOTE: This event is virtual - please do not come to The Clarice.

This event will include a live transcript which can be accessed here.

The National Orchestral Institute + Festival, a program of the University of Maryland’s Clarice Smith Performing Arts Center (The Clarice), trains aspiring orchestral musicians, composers, conductors and arts administrators from across the country in a month of dynamic music-making and professional exploration. Participants are chosen through a rigorous, cross-country audition process. Every year, these young artists present passionate and awe-inspiring performances of adventuresome repertoire both at The Clarice and in the College Park, Maryland community.

Trailblazing conductor Marin Alsop was appointed as the first-ever Music Director of the National Orchestral Institute + Festival in 2020. In addition to conducting innovative programs onstage at The Clarice, Maestra Alsop will launch the NOI+F Conducting Academy and record three full-length documentaries with Naxos Records. In 2015, NOI+F began a partnership with Naxos to record one concert of all-American music each year—Naxos’ first partnership with a summer festival of its kind. The 2019 recording “Ruggles, Stucky, Harbison” received a Grammy nomination in the “Best Orchestral Performance” category.