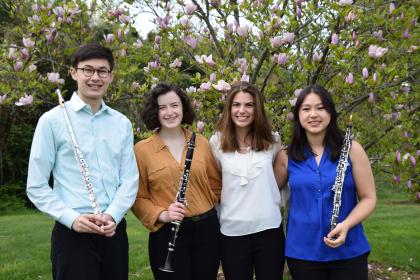 Missed the performance? The stream is available here until February 19, 2022.

Please note: This is a virtual-only performance. Please do not come to The Clarice to attend.

Watch the livestream from the comfort of your home.

Presenting eight world premieres by UMD School of Music student composers, Living Music celebrates the process of creating new music and the intimate collaboration between composer and performer. Each composer featured on the program has had the opportunity to work closely with members of the Pressez Quartet (flute, oboe, clarinet and piano) through the composition process, resulting in a unique collaboration and level of engagement from both composers and performers.

Following the performance, there will be a Q&A so that audience members can explore
the artistic intentions behind each composition as well as the collaborative process of
rehearsing and premiering the works.

PROGRAM MENU: PROGRAM · ABOUT THE ARTISTS

PRESSEZ QUARTET is in its sixth semester of performing as an ensemble. An amalgamation of winds and piano, Pressez has taken on many different contexts to perform music. As a quartet, Pressez performed at the National Symphony Orchestra Summer Music Institute, intensively studying 20th century French music under the tutelage of principal oboist Nicholas Stovall and pianist Lisa Emenheiser. At the University of Maryland, Pressez has been coached by professors Sarah Frisof, Rita Sloan and Mark Hill. Pressez has also been featured as an ensemble with the College of Arts & Humanities’ #KeepCreatingUMD virtual initiative during the college’s transition to an online interface as a response to the COVID-19 pandemic. In collaboration with Robert Gibson, Pressez has been working with the students of MUSC448O to premiere new music for the rare combination of flute, oboe, clarinet and piano.
GARRETT COOKSEY is an undergrad French horn performance major at the University of Maryland. They come from Southern Maryland where they heard the piano music of Mozart and Beethoven at an early age. Their interest in composition largely came from neoclassical composers such as Stravinsky and Ravel as well as video game composers like David Wise and Koji Kondo. They believe that music is a personal but public means of expression with composition being its purest form. In their free time, Cooksey enjoys hiking, video games and running.
DREW GATLIN is a senior at the University of Maryland, majoring in vocal music education and music theory. He studies voice with Gran Wilson and sings with the UMD Chamber Singers under the direction of Edward Maclary. He enjoys engaging with experimental music and literature. His tastes range from the diverse idioms of Ives, Feldman and Cage to the popular stylings of Billie Eilish, Kesha, Ween and LCD Soundsystem.
WILLIAM GU is a Chinese American musician from Rockville, Maryland. He is currently pursuing an undergraduate viola performance degree at the University of Maryland under the tutelage of Katherine Murdock. While in college he discovered his love for improvisation, which led to him starting composition. Writing music is a way for him to destress when he is not feeling well. He appreciates how composing allows him another way to express his creativity and love for music. Gu enjoys listening to video game music, movie soundtracks and Lo-fi. He especially loves the music in movies by Studio Ghibli. Some of the composers who have had the most impact on his composition style are Joe Hisaishi and Yasunori Mitsuda.
MAGGIE JOHNS is a senior in piano performance, studying with Larissa Dedova. While a pianist dedicated to solo performance, Johns is equally passionate about chamber music. She was co-founder of the Pressez Trio in 2018, which evolved to become the Pressez Quartet in 2019. Johns is always looking for ways to bring music to new audiences with her colleagues; she recently organized and performed in a concert featuring both solo and chamber music live in DC. Living Music is an especially exciting venture for Johns since, along with the Pressez Quartet, she is premiering not only her peers' compositions but also her own work.
MERZANA KOSTRECI is a classical pianist with an international performing career, currently in her second year of a master’s degree in piano performance. She actively performs as a soloist and chamber musician, in addition to teaching piano. Her musical journey started at six years old, when she enrolled at an art-focused school in her native Albania, studying piano and solfege. Kostreci holds a diploma from the University of Cologne, Germany, and a Bachelor of Arts from the University of Maryland, College Park, both in piano performance. Her wide repertoire range from many composers, her performance background and theory knowledge, as well as her experience teaching piano led to her interest in composition. Kostreci is fluent in five languages, and enjoys walks in nature in her free time.
ISADOR (IZZY) MILLER has been teaching piano, guitar and music theory professionally for more than fifteen years to students of all ages and ability levels. He spends much of his time thinking about cognitive psychology and the perceptual mechanisms involved in skill acquisition for musicians. Though he grew up playing popular music, he draws significant influence from French composers of the late 19th and early 20th centuries. When not thinking about music, Miller enjoys fermenting sauerkraut, cider, kombucha and anything else that can be placed in a jar and left in his basement for a few weeks.
MATTHEW OBER is in his fourth year at the University of Maryland pursuing a dual-degree in flute performance as a part of the Music Professional Program (B.M.) and Information Science (B.S.). Even as a performer, Ober developed a passion for writing music in high school with a strong sense of applying music to storytelling inspired by film music. In 2018, he was invited to present his composition Old English Tales: A Mini Symphony at the annual Catholic University High School Academic Symposium based on the texts of “Beowulf,” “Grendel,” “Frankenstein” and “Hamlet.” He is the flutist of Pressez, having been a member since 2019. Ober studies flute with Sarah Frisof and Aaron Goldman, with additional composition mentorship from Robert Gibson.
RACHEL RAPHAEL is an organist based in Northern Virginia. She began her musical studies in rural Montana, first with piano and later the organ. Music was a side activity for many years while she studied molecular biology at Brigham Young University and later stayed at home to raise her family. She continued playing at churches and taking private lessons over the years, and in 2015, she began studies in organ performance and church music at Shenandoah Conservatory, graduating in 2019. She is currently pursuing a master’s degree in music theory at the University of Maryland and accompanies Lutheran, Catholic and LDS congregations in Loudoun County. Raphael has five children ages 15–24, and two cats. Her husband Marc is retired from the US Air Force.
Archived Event