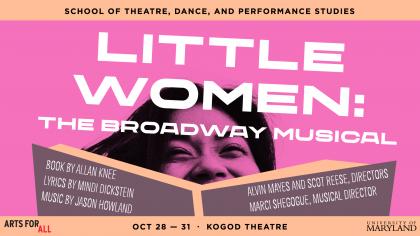 Based on the novel by Louisa May Alcott

In Louisa May Alcott’s beloved book “Little Women,” writer Jo March and her sisters Meg, Beth and Amy represent the experiences of women and families during the Civil War. Alcott’s timeless coming-of-age story debuted as a musical on Broadway in 2005, bringing these memorable characters to life through song and movement. The musical immerses audiences in the adventures of the March sisters, through love, hope and self-discovery.

“It's hard not to love the March girls of Concord, MA, so deeply etched are Jo, Meg, Beth and Amy on the cultural and emotional landscape that they resurface from generation to generation like cherished friends.”—David Rooney, Variety

Little Women: the Broadway Musical
Book by Allan Knee
Lyrics by Mindi Dickstein
Music by Jason Howland
Based on the novel by Louisa May Alcott

This performance will last approximately 2 hours 15 minutes, which includes one 15-minute intermission.

VIDEO OR AUDIO RECORDING OF THIS PRODUCTION IS STRICTLY PROHIBITED.

This production is dedicated to the memory of Carmen Balthrop, Herb Burgess, Walter Dallas, David Driskell and Sandy Jackson. Like Beth March, they all had charitable hearts that impacted the lives of all they touched. And like Jo, who resolved to live her life with more consideration and care for others, we hope others will do the same.

The Feminist Sisters of Concord

Set during the U.S. Civil War, Louisa May Alcott’s Little Women shows us different archetypes of women in that era through the five March women, all of whom were based on women from Alcott’s life. Jo, our protagonist, doesn’t give “two figs” about society, and goes against every assumption of what a lady should be in the late 1800s. She dreams of being a writer and financially independent, and she puts her relationship with her sisters above any man. Jo’s dreams shift slightly throughout the course of the play, but her choices never dim her independence, and never undermine the characterization that Alcott so strongly believed in. Amy, the youngest March sister, is practically the opposite of Jo. She values the finer things in life, consistently shows her admiration for boys, and dreams of being part of higher society. Meg, the oldest March sister, yearns to feel appreciated and wishes to keep her family together through hard times, ultimately marrying for love, not status. Beth is there to unite them all, finding the good in people and focusing on the present instead of making dreams for the future. Their mother, who they affectionately call “Marmee,” struggles to keep her family afloat while her husband is at war.

The writing and publishing of Little Women was a feminist act. In Alcott’s era, women’s stories were not seen as worthy. Even if the March women’s choices are not all seen as feminist, Alcott’s intentions were. It is clear that her main vision of a feminist is Jo (based on Alcott herself): a passionate, white, lower-middle class woman who refuses to marry and insists on providing for herself. We also know that the mainstream feminism of Alcott’s time ignored the needs of women of color and other marginalized women, in part due to the pervasive view that these women were unfeminine and not deserving of respect. Today, the concept of femininity is being deeply explored: many young people are refuting the gender binary and arguing that there is nothing that makes a woman a woman. Even still, women and feminine-presenting people are judged on their choices and their bodies, and people with uteri (an organ associated with femininity) are regulated and restricted. Black women are often described as too manly and aggressive, Asian women are treated as helpless and different body types are regarded as more or less likely to deserve “feminine” treatment. These are just a few examples of how society treats women and how important it is to tell the story of Little Women in the 21st century.

The characters of Jo, Amy, Meg, Beth and Marmee do not share one trait that makes them specifically feminine; we see their label of “little women” shown through their complex, close and caring relationships with each other. The March women of our production are diverse; they do not all look alike and they all experience the world differently. The actors in this production have worked hard to find themselves in their characters and to play them with truth. In showing Little Women here at TDPS, we are telling not only Louisa May Alcott’s story, but the stories of the little women in our cast and in our lives.

For more exploration of the above concepts and thoughts, please see the following articles:

“As a Black Woman, I’m Tired of Having to Prove My Womanhood” by Hannah Eko and “Yes, Little Women is a Feminist Novel - And Here’s Why” by Kathleen Keenan.

Keta Newborn (stage manager) entered the world of theater in 2006 after previously spending 12 years as a computer engineer. Keta's involvement within the theatrical world has allowed her to hold many different titles on many different levels for almost two decades now. Keta is recognized for being a detailed-oriented person who is deeply committed to her work. Highly skilled at working with a diverse group of people to build effective creative solutions by using well-developed interpersonal communication skills, Keta would like to thank her Father above for the opportunity to be used as one of HIS vessels, working to bring HIS work of art into the hearts of many. To learn more about Keta and her work, please visit www.newbornketa.com.

Alvin Mayes (director) has worked collaboratively with Scot Reese for a number of productions: this season’s Little Women: the Broadway Musical, Flyin’ West in 2019 and others. In his tenure at the University of Maryland, he has created more than 150 dance works on students. Some of these works were performed at V Festival de la Cultura de Origen Caribeño in Santiago de Cuba, at the Port Sisters City Festival in Nagoya, Japan, many festivals in the mid-Atlantic region of American College Dance Association and the Choreographers’ Showcase. In spring 2021, he received a grant from Greenbaum Charitable Foundation to create Chasing the Moon/Crossing Jordan, a short dance film for dance alumnus Atlas Hill. Other Greenbaum Charitable Foundation grants have supported him to make Los Ojos Sobre Manabí for Compañía Ceibadanza in Manta, Ecuador, which was accepted in XI Festival Internacional “Fragmentos de Junio” 2013 in Guayaquil, Ecuador.

Scot Reese (director) Professional theatre credits include productions from Los Angeles to New York. Television credits include daytime dramas, situation comedies, variety specials, commercials and an Emmy Award in performance. Recent credits include world premieres of Oliver du Brasil, A Cricket in Times Square and Blues Journey at the Kennedy Center, and the Waiter at Arena Stage. Additional recent credits include the opera Dr. of Alcantara at Strathmore Music Center, Once On This Island at the Round House Theatre, Pretty Fire for the African Continuum Theatre Company and Barefoot in the Park (with Laura Linney and Eric Stoltz) at LA Theatre Works. In 2019, he was inducted into the College of Fellows of the American Theatre.

Marci Shegogue (music director) has music directed hundreds of professional, community and educational productions over the past 40 years. She is president and music director of The Free Theatre, a tuition-free student-led teen theatre company and resident music director for Free Range Humans. Marci has worked extensively with educational theatre and music programs, including Montgomery County Public Schools, Imagination Stage, Act Two and BlackRock Center for the Arts. As a UMD theatre alumna, she is excited to return to the community where her music directing career began. Marci is a collaborative accompanist, audition coach and freelance musician.

Michael Winston (lighting designer) recently graduated from the University of Maryland with his M.F.A. in lighting design. He currently designs in the DMV area. You can find more of his work at michaeldwinston.com.