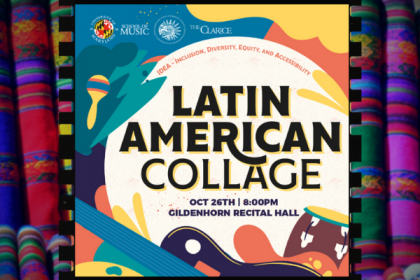 The digital broadcast of this event will be available to view until December 26, 2022.  You may access the recording here.

The School of Music community celebrates the rich cultural diversity of understudied Latin American regions showcasing student-led ethnomusicology and performance projects. Join us for a musical promenade of the popular, classical and folkloric colors in the Salvadoran Diaspora of Washington, D.C., Guatemala, the Dominican Republic and an exciting performance featuring Afro-Cuban rhythms.

This is an event created in collaboration between the Latin American and Caribbean Studies Center and the School of Music IDEA (Inclusion, Diversity, Equity and Access) Committee.

Health & Safety:
There may be COVID safety policies such as mask requirements in place when you attend this event. Please see our health and safety page for the most up to date information about attendance.

Do you have questions or comments about this program? Submit them here and we will answer them during a friendly Q&A at the end of the event!

Suite Chapiniana (1964): The title Chapiniana refers to the Chapas area of Guatemala, located about 21 miles southeast of Guatemala City. The “Pastorale” sets the mood of the countryside portraying shepherds playing lonely melodies on their flutes. This image is suddenly interrupted by the brusque “drunken” humor featured in “Burlesque.” The “Nocturne” invokes a magical spell often felt when staring into the Guatemalan nightfall, followed by the nostalgic sentiment of “Ronda.” After coloring nature, humor, magic and nostalgia, “Fiesta” closes the Suite with cheerful explosions of sounds and dancelike ostinatos.

Gagá: Haitian-Dominican Music and Dance: Gagá is a processional music and dance from the Dominican Republic that is mostly practiced by Dominicans of Haitian ancestry. During Semana Santa (Easter Week), gagá bands lead processions that go through towns and cities to honor and show gratitude to deities of the Vodou religion. For three days, devotees and onlookers in the streets follow dancers, musicians and singers as they offer music to create a festive atmosphere. Interlocking and syncopated rhythms and short repetitive melodies characterize gagá music, which is accompanied by a competitive dance style. The Haitian Dominican community and gagá groups face racial discrimination in the Dominican Republic. Amid growing anti-immigration sentiment and policies toward Dominicans of Haitian origin, leaders of gagá groups are organizing themselves to work toward gaining greater visibility, social acceptance and political representation.

Afro-Cuban Concerto (2001): Composer and flautist Valerie Coleman has contributed a plethora of engaging and invigorating works to the wind quintet repertoire which aim to introduce unfamiliar cultural influences to the realm of classical performance. Her Afro-Cuban Concerto for Wind Quintet, written in 2001 for her quintet the Imani Winds, is inspired by the Afro-Caribbean tradition of Santeria worship, a confluence of traditional Yoruba religion and Catholicism. The first movement, “Afro,” begins with a call to prayer which leads into a grooving section grounded in a traditional 6/8 clave rhythm. The ensemble continuously maintains the clave rhythm throughout the rest of the movement, on top of which they play long, soaring melodies and rip-roaring, virtuosic solos. The second movement, “Vocalise,” relaxes into a slower, more mellow mood, all the while being subtly propelled by ostinato habanera rhythms. The movement offers further spotlights to soloists, but this time in a more free, expressive context. The piece culminates in the third movement, “Danza,” a blisteringly fast dance propelled forward by layered, interlocking rumba rhythms. Throughout the movement, members of the quintet present the most virtuosic displays of the piece in a rapid cut-time groove. The piece as a whole offers emotional insight into the spirituality, passion and joy of Afro-Cuban music and the culture and traditions surrounding it.

Gonzalez is a singer and songwriter who has touched the lives of many people with his fun yet thoughtful music, sending a message to adults and children of all cultures that we can and should unite to build a better world for all. As a songwriter in the 1990s, Gonzalez sang about immigrant struggles, winning him second place in both the Billboard songwriting competition and OTI song festival, and earning him five Washington Area Music Awards (WAMMIEs) over the next 10 years. In 1994, he recorded his first CD, “A Quien Corresponda,” with original songs that reflected the many transitions his life had undertaken. Building community, finding our common human threads, instilling hope and fighting for justice have all been themes in Gonzalez’s life that have poured into his music and his daily interactions. His persona is as special as his music and has taken him to perform at venues such as the Kennedy Center’s Millennium Stage, the New York Lincoln Center, president Clinton’s Inauguration, the Levine School of Music, the Festival Verdad in El Salvador, many festivals, conferences and universities, and even to Cairo, Egypt.

Villalobos is a Costa Rican doctoral candidate in ethnomusicology at the University of Maryland. Her dissertation is dedicated to Salvadoran popular music in the Washington, D.C. area, especially during the COVID-19 pandemic. In support of her doctoral research, Villalobos was awarded the 2018 Blanton Owen award by the American Folklife Center to document Salvadoran festivals in Maryland, which resulted in brown-bag presentations at the Smithsonian Institution, Library of Congress and a photography presentation at the Salvadoran Consulate through Casa de la Cultura El Salvador. She has also presented papers at the annual conferences for the Society for Ethnomusicology and the British Forum for Ethnomusicology. Besides her doctoral work, she has been an intern with the Center for Folklife and Cultural Heritage at the Smithsonian, working for the Folklife Festival and the Mother Tongue Film Festival.

Hailing from Guatemala, Hernández is a doctoral candidate at the University of Maryland. His dissertation explores 20th and 21st century Guatemalan piano literature. A passionate educator, Hernández is a co-founder of the International Chamber Music Festival of Guatemala and has served as visiting faculty at the University of San Carlos in Guatemala. Hernández is a member of the Global Leaders Program 2022 Cohort seeking to drive innovation, growth and social impact with music and cultural agency. He has won awards from the Lynn Conservatory Concerto Competition, Moores School of Music Concerto Competition, TMTA, MTNA (Texas Division), the Chautauqua International Piano Competition, the Maria Clara Cullell International Piano Competition and several others. Hernández holds degrees from the University of Houston, Eastman School of Music and Lynn University. He has participated in many renowned music festivals, including Chautauqua, Aspen and Zeister Muziekdage in the Netherlands.

Ignis is the graduate fellowship woodwind quintet of the University of Maryland School of Music. Its members are Danielle Kim on flute, Nathaniel Wolff on oboe, Christian Whitacre on bassoon, Zachary Miller on horn and Kyle Glasgow on clarinet. The group is dedicated to creating electrifying performances to amplify the voices of underrepresented composers in the western music world. Through collaborative efforts in community engagement and utilizing modern technology in tandem with traditional performance principles, Ignis aims to push the boundaries of chamber music beyond the standard classical canon. Its members hold degrees from top universities and conservatories in America such as the University of Maryland, University of Michigan, New England Conservatory and Shenandoah Conservatory. Ignis’s members are devoted to bringing the highest standards of musical excellence to the Washington, D.C. metropolitan area and beyond.