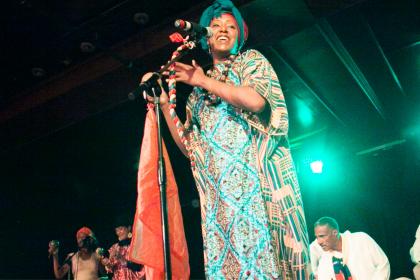 Between 1960 and 1980, Venezuelan architect and folklorist Oswaldo Lares recorded more than one thousand tracks of rural folk songs around Venezuela. He captured genres and singers rarely known outside their regions that would later become emblems of Venezuelan folk when Lares’ work was gradually released on vinyl. Today, Lares’ collection is safeguarded by a new generation within his family, led by his son Guillermo.

For Las Cantoras, Afro-Venezuelan singer Betsayda Machado and Oswaldo Lares are co-curating a compilation of these historical rural recordings by female singers from Lares’ archival collection. Looking at different regions in the country, the result will be a rarely seen digital compilation which includes liner notes, historical pictures, and context for each of the singers and their regions. The album is being co-produced by Lares’s son Guillermo and Juan Souki as part of a digital residency and co-commission by The Arts Center at NYU Abu Dhabi, and The Clarice Smith Performing Arts Center is looking forward to joining this project during its next phase.

Hosted by The Arts Center at NYU Abu Dhabi, this event is a pre-release audio-video broadcast with the artists and research team including recorded audio and video as well as live commentary by the project leaders.

Without the clarion voice of Betsayda Machado, the world would know much less about the musical riches and cultural heritage of Afro-Venezuelans. In 2017, Souki produced Machado’s first album as a set of rural recordings in collaboration with her village parranda: Parranda El Clavo. The album celebrated the parranda’s 30th anniversary and their first recording ever, capturing the group and the singer’s raw energy under one of the village’s trees. Named Loé Loá, rural recordings under the Mango tree, the album made the New York Times Best Albums of 2017 and propelled the group’s touring career in the Americas and Europe.