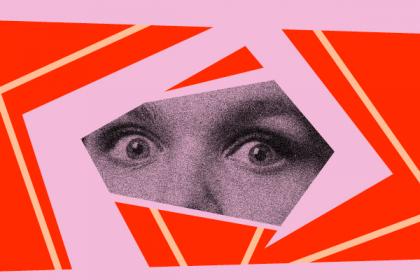 In what playwright Lauren Yee describes as an “existential slasher comedy,” Hookman tells the story of Lexi, a college freshman who is haunted by the sudden death of her childhood best friend—all while navigating the pressures of being a young woman entering adulthood. The production brings the horror film genre to the stage, inviting audiences to explore themes of grief, trauma and guilt in an up close and personal way.

“Yee’s skill in crafting all the conversations is the great gift of her ‘Hookman,’ and not just for the character-specific comedy and deft social and generational satire packed within them. Beneath all the laughs is a yearning quest for connection and self-definition, struggling to break through the distractions of youth and digital immersion.” — Robert Hurwitt, SFGATE

Concessions: The Clarice lobby concession bar Encore will not be open for food and beverage sales during this event.

This performance will last approximately one hour and 25 minutes with no intermission.

VIDEO OR AUDIO RECORDING OF THIS PRODUCTION IS STRICTLY PROHIBITED.

“Hookman” is presented by arrangement with Concord Theatricals on behalf of Samuel French, Inc. www.concordtheatricals.com

“Hookman” is produced with support from the Maya Brin Institute for New Performance at the School of Theatre, Dance, and Performance Studies.

To see a list of full-time production staff, please visit tdps.umd.edu/directory and theclarice.umd.edu/the-clarice-staff.

“...make them laugh, and while their mouths are open, pour truth in.” - Harold Clurman

Many of the roles I played while studying at the University of Maryland, College Park were comedic—from Griever in Blue Window (directed by Scot Reese), to the title character in Scapin. It wasn’t until my professional life began, however, that I fully realized the transformative power of comedy.

In a world that is fraught with the anxieties of a still existing pandemic and a theatre industry that is still struggling with the ideas of community, inclusion, and equity, comedy and laughter is a radical (and perhaps surprising) response to those of us calling out for social change and justice. Underneath the slick veneer of a 90s inspired horror film, and through the laughably absurd unfolding of events, Lauren Yee presents the all too real issues that young women on a college campus face: from the growing pains associated with being a freshman to mental health to sexual assault. Yee uses comedy to open our ears and hearts before she presents us with these issues, and through laughter she points to a system in power that is inherently broken. We are asked to see these powers as absurd and laughable, not to make light of it, but to instead empower us to find the strength and courage to make change.

It is humbling to be asked back to my alma mater to direct this piece, and I am honored to be directing this talented cast of young actors. After more than a year of virtual work due to the pandemic, I am proud to say that these young actors and this design team have navigated the obstacles thrown at them with grace and humor. The pandemic exposed many social and cultural issues in desperate need of rethinking, reimagining and reworking. It is my hope that the actors you will witness tonight and the work of the design team and crew will—after you have a good chuckle—empower you to see systems of oppressive power as nothing more than an absurd horror film where we all have the agency to change the ending.

Special thanks to former teachers and forever mentors Scot Reese and Leigh Smiley, Jack Utrata for making me watch horror films, and of course the Claridad family who came to every show at UMD. Dedicated to the class of 2004, and to every student who had the almost impossible task of learning the craft of theater in a pandemic.

In the summer of 2014, student Emma Sulkowicz carried a twin XL mattress across the Columbia University campus. This act was part of a performance art piece for their senior thesis, “Mattress Performance (Carry That Weight),” which protested Columbia’s lack of action against a student who Sulkowicz alleged had raped them in their college dorm in August 2012. Sulkowicz’s performance art piece made headlines and brought attention to the issue of sexual assault on college campuses.

In March 2012, Lauren Yee presented her own thesis, the play Hookman, to its first audience. Hookman follows a college freshman, Lexi, who struggles with the death of her best friend while also processing the trauma of sexual assault. Just like Sulkowicz’s “Mattress Performance,” Yee looks at the response to campus sexual assault and the tendency to disbelieve victims.

Though Yee’s and Sulkowicz’s work bring attention to the sexual assault on college campuses in the early 2010s, campus sexual assault remains a prevalent issue today. The Association of American Universities reported that in 2019, 26.4 percent of cisgender female students, 6.9 percent of cisgender male students and 23.1 percent of transgender/genderqueer/non-conforming students would experience rape or sexual assault since enrollment.1 Here at the University of Maryland, multiple sexual assault allegations recently came forward against the fraternity Pi Kappa Alpha, also known as Pike.2 Despite the continuing reality of sexual assault in Greek life organizations at UMD, President Darryl Pines recently told The Diamondback, “I don’t think we have a big problem here in Greek life.”3

At UMD, there were 248 reports, 77 complaints and 14 investigations of sexual misconduct from 2018 to 2019.4 This is almost certainly an undercount of the number of cases of sexual misconduct on campus. Guilt, fear of reprisal, lack of trust in law enforcement and numerous other factors result in significant underreporting. According to the Department of Justice, from 1995 to 2013, only 20 percent of female students from the ages of 18-24 who are victims of rape or sexual assault reported to law enforcement.5

The denial and invalidation of one’s own experiences is something that Lauren Yee explores in Hookman through the aesthetics of 90s teen slasher films. Characters might hear things no one else can hear, find blood in places it shouldn’t be or feel as if they’re being followed. Much like Sidney Prescott seeing Ghostface everywhere she turns in the film Scream (1996), for Lexi, it becomes difficult to parse out what is real and what is paranoia. Lexi learns to discount her own perception because the monster that haunts her is too horrible to be real.

Lexi’s struggle with her own perception reflects many victims’ experiences with the aftermath of rape and sexual assault. Victims’ recognition of their experiences as assault is oftentimes muddled by a culture that is predisposed to doubt their claims. In Sulkowicz’s case and the cases of many other victims, allegations are oftentimes disregarded by universities and law enforcement. In many ways, Lexi finds herself isolated in college, and the denials, judgments and preconceived notions about rape that surround Lexi cause her to doubt the severity of her experiences. Perhaps this lack of support is why her assault goes unreported.

Going into this play, you might ask: How do we perceive victims and perpetrators? What narratives surround both? Where are our biases? And most importantly, what can we do in our communities to create a culture that discourages sexual assault and supports victims?

Update (10/25/21): Following weeks of pressure from students, UMD has once again suspended Pike.6

Chris Henrriquez (assistant lighting designer) first-year M.F.A. lighting design candidate. This is Chris’s first time working on a production at UMD and he couldn’t be more excited! A California native, he has worked extensively around the SoCal area and the Disneyland Resort.