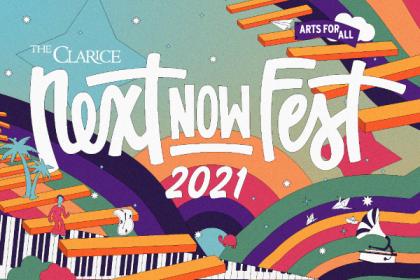 Winner of the Academy Award for Best Animated Feature Hayao Miyazaki’s wondrous fantasy adventure is a dazzling masterpiece from one of the most celebrated filmmakers in the history of animation.

Chihiro’s family is moving to a new house, but when they stop on the way to explore an abandoned village, her parents undergo a mysterious transformation and Chihiro is whisked into a world of fantastic spirits ruled over by the sorceress Yubaba. Put to work in a magical bathhouse for spirits and demons, Chihiro must use all her wits to survive in this strange new place, find a way to free her parents and return to the normal world. Overflowing with imaginative creatures and thrilling storytelling, Spirited Away became a worldwide smash hit, and is one of the most critically-acclaimed films of all time.

The Hayao Miyazaki Film Festival is presented in partnership with University Libraries.

This event is part of NextNOW Fest. The Clarice’s NextNOW Fest is an inspiring arts experience that celebrates imagination, creativity and community. By amplifying the voices of intriguing, inventive artists from around campus and our community, NextNOW Fest creates a forward-looking microcosm where art transforms our future and (re)connects us all.

NextNOW Fest is a signature event in University of Maryland's new Arts for All initiative, which leverages the combined power of the arts, technology and social justice to address the grand challenges of our time. In addition to our traditional student, academic and touring arts lineup at The Clarice on Sep 17 and 18, we’re thrilled to forge new partnerships with more student-led groups, academic departments and community organizations to expand the festival to seven days at sites throughout campus and into College Park!