Echoes of the Past: Ignis Graduate Fellowship Woodwind Quintet

Echoes of the Past 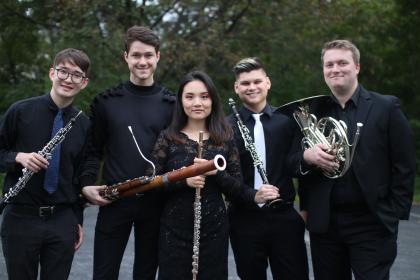 Attend in person at Tawes Hall or watch the livestream from the comfort of your home.

Out with the old, in with the new? Why not both? Experience Ignis perform a varied and musically diverse program featuring Maslanka's introspective Wind Quintet No. 3, the contemporary grooves of Valerie Coleman's Afro-Cuban Concerto and a riveting transcription of the Ravel String Quartet in F Major.

Health & Safety for In-Person Attendance:
There may be COVID-19 safety policies in place, such as mask requirements. While this event takes place at Tawes Hall, The Clarice's health and safety guidelines still apply. Please see the health and safety page for the most up-to-date information about attendance for this event. 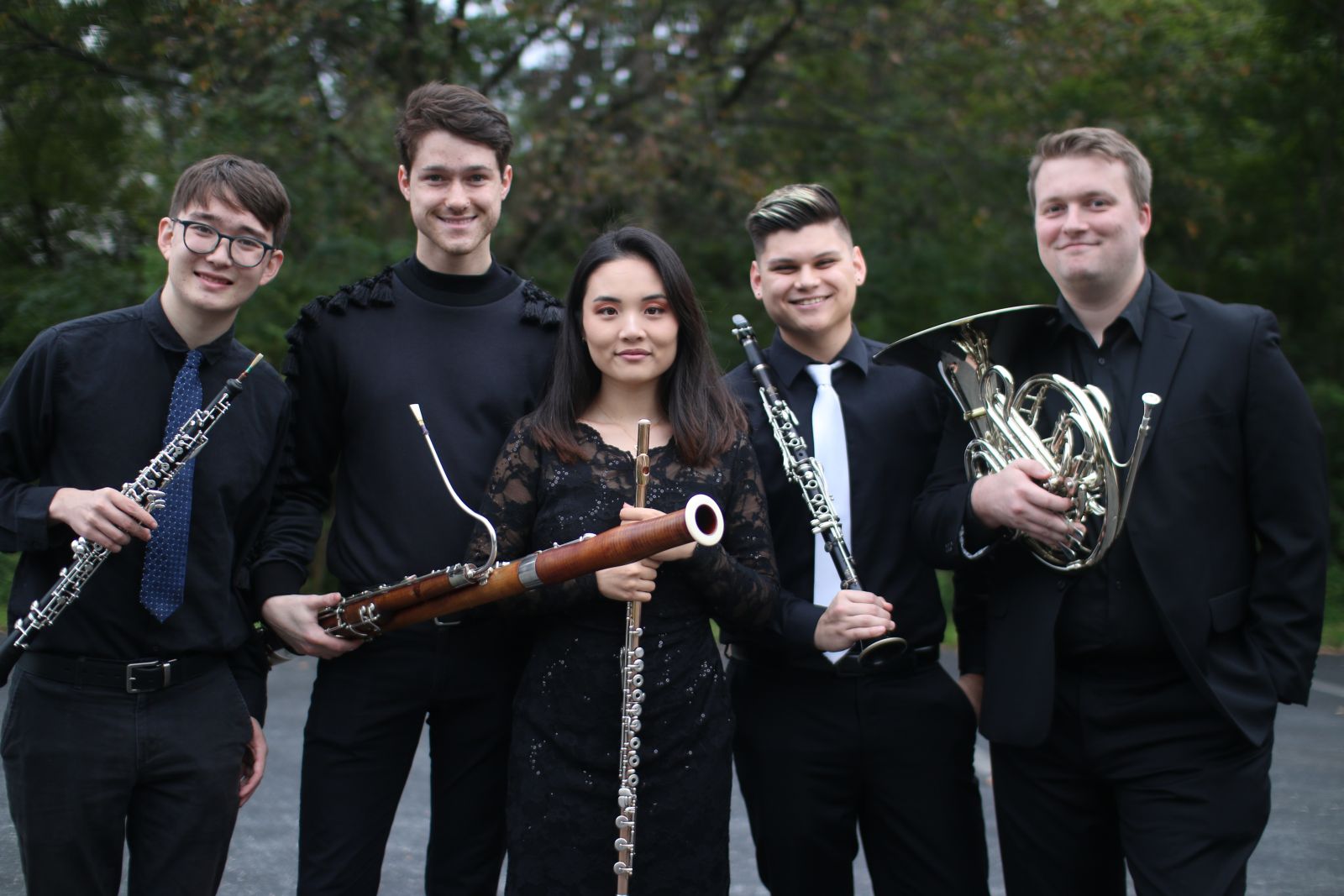 Ignis is the newest premier fellowship woodwind quintet of the University of Maryland School of Music. They are dedicated to creating electrifying performances to amplify the voices of underrepresented composers in the western music world. Through collaborative efforts in community engagement and outreach, recording, premiering new works and utilizing modern technology in tandem with traditional performance principles, Ignis aims to push the boundaries of chamber music beyond the standard classical canon. Its members hold degrees from top universities and conservatories in America such as the University of Maryland, University of Michigan, New England Conservatory and Shenandoah Conservatory. Ignis’ members are devoted to bringing the highest standards of musical excellence to the DC metropolitan area and beyond. Learn more about Ignis in their announcement on the School of Music website.

Danielle Kim is a flutist from Virginia who began her flute studies while she was living in India. She has primarily studied with Jihoon Shin of the Qatar Philharmonic Orchestra and Leah Arsenault of the National Symphony Orchestra. Kim earned her Bachelor of Music degree in flute performance from the University of Michigan under the tutelage of the distinguished Amy Porter, where she graduated with high honors. Kim has participated in the American Youth Philharmonic Orchestra, the Boston University Tanglewood Institute and the National Youth Orchestra of the USA. She has placed in various competitions including the Flute Society of Washington, the Central Ohio Flute Association, the National YoungArts Foundation and the Glenn Miller Foundation. Currently, Kim is pursuing her Master of Music degree in flute performance with Associate Professor Sarah Frisof at the University of Maryland.

Nathaniel Wolff is a versatile oboist and educator based in College Park, Maryland. He is pursuing a master’s degree in oboe performance with Professor Mark Hill at the University of Maryland. Prior to attending Maryland, Wolff earned a bachelor’s degree in oboe performance studying with Nancy Ambrose King at the University of Michigan, where he graduated summa cum laude. He has received additional instruction from Eric Ohlssohn, Emily Brebach, Jamie Roberts, Robert Stephenson, Elizabeth Koch Tiscione and Kim Lorch. In masterclass settings, he has performed for Andrew Parker, Katherine Needleman, Anna Hendrickson, Aaron Hill and Christian Schmitt. As an advocate for new music, Wolff has participated in several world premieres at venues like the Brevard Music Center and the Midwest Composer’s Symposium. As an educator, he has experience teaching privately and as a tutor in the MStars music tutoring program sponsored by the University of Michigan to provide music education to underserved middle school students. In past summers, Wolff has studied at the Brevard Music Center, the National Symphony’s Summer Music Institute and Sewanee Summer Music Festival.

Christian Whitacre is a DC-based musician and the bassoonist of Ignis. Starting his chamber career in high school, he performed with the Paramount Wind Quintet, a professional nonprofit group touring venues in Northern Virginia. As an orchestral player, Whitacre has performed at Chicago Symphony Hall, the Kennedy Center, the Adrienne Arsht Center and the Blossom Music Center. Whitacre has appeared with the Atlantic Symphony and Philharmonia Boston, and has also toured the Dominican Republic with the MIT Wind Ensemble. In a masterclass setting, Whitacre has performed for Frank Morelli, George Sakakeeny, Christopher Weait and Ryan Romine. In the past, he has attended the Miami Music Festival, where he was an opera fellow. He has also been a young artist at the Kent Blossom Music Festival, where he performed side-by-side with the Cleveland Orchestra. Passionate about modern music and pushing the boundaries of the classical music world, Whitacre has attended the inaugural year of the Mostly Modern Festival, playing principal with the American Modern Orchestra where he was a soloist in the North American continental premiere of Mirror II by Pelle Gudmundsen-Holmgreen. He has also performed the world premiere of Ready Five for bassoon and electronics. Whitacre currently is a student at the University of Maryland under the tutelage of Lecturer Joseph Grimmer. Holding a degree from the New England Conservatory, Whitacre studied under principal bassoonist of the Boston Symphony Orchestra, Richard Svoboda. Additionally, his teachers include William Winstead, Barrick Stees and Charles McCracken.

Zachary Miller earned his bachelor's degree in horn performance while studying under Geoffrey Pilkington. During his time at Shenandoah, Miller performed with several student led chamber ensembles. As an orchestral horn player, he has performed with groups such as the NOVA Annandale Symphony, Shenandoah Symphony, Shenandoah Wind Ensemble, Fairfax Wind Symphony and the New Orchestra of Washington DC as a part of their NOWthis apprenticeship program. He has also had the opportunity to work with and collaborate with other notable horn players such as Amy Horn, Rodger Whitworth and James Nickel. Music has always been a fundamental aspect of Miller’s life. One of his main aspirations is to make music available to more people by participating in community outreach programs for the arts. Coming from a family of educators, Miller is a strong advocate for music and arts programs in education. At the University of Maryland, he is studying under Professor Gregory Miller (no relation) while pursuing his master’s in horn performance.

Kyle Glasgow is back at the University of Maryland for a master's degree in clarinet performance, having just earned his bachelor's from the same institution. Along with serving as the clarinetist of Ignis, Glasgow aims to continue premiering new music with the goal of amplifying the voices of underrepresented composers in the western classical music world. He has a particular interest in modern recording and audio engineering/production as well as deep-dive studies into musical interpretation. Through collaborative efforts in community engagement and outreach, recording and utilizing modern technology in tandem with traditional performance principles, Glasgow aims to push both the boundaries of chamber music and classical clarinet beyond the standard classical canon. He has a multifaceted musical skill set with additional skills in clarinet repair, reed making, conducting and aural skills. Specializing in the E-flat clarinet, he is an experienced auxiliary clarinetist and can be heard on several reference recordings for the Naxos musical database. Glasgow has performed in clinics and masterclasses around the world including the Princess of Asturias program in Spain, ClarinetFest in Ostend Belgium and the Interlochen Center for the Arts. He teaches a private studio of clarinetists of all ages in the DMV area, and he serves as the co-conductor of the New Horizons Clarinet Choir and as a clarinetist for the Polka Terps. He continues to study with Professor Robert DiLutis at the University of Maryland as well as with several other clarinetists in the region.

This event will be performed at Ulrich Recital Hall.  If you are unable to join us in person, we invite you to watch the livestream here.