Dvořák's Symphony No. 9, "From the New World": UMD Repertoire Orchestra

Dvořák's Symphony No. 9, "From the New World" 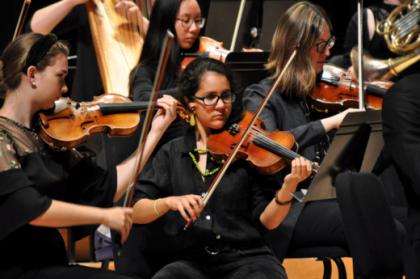 Missed the concert? The livestream can be viewed here until February 7.

Venue:
Dekelboum Concert Hall
Seating:
General Admission
Estimated Length:
This performance will last approximately 65 minutes and will not include an intermission.

The UMD Repertoire Orchestra performs Antonín Dvořák's Symphony No. 9, "From the New World" and instrumental movements from from Pietro Mascagni's opera of passion and jealousy, Cavalleria Rusticana.

The Clarice lobby concession bar Encore will not be open for food and beverage sales during this event.

Cavalleria Rusticana (1890)
Our performance opens with two symphonic numbers from the opera Cavalleria Rusticana. Set in a Sicilian village in southern Italy, the story revolves around the young villager, Turridu, who returns from military service and finds out his fiancée, Lola, has married someone else. He dates another girl. Lola gets jealous and seduces him. They carry out an affair. (The story so far all takes place in the prelude.) Lola’s husband sees them together. He challenges Turridu to a duel and kills him in the fight.
The opera was an instant hit and has been one of the most performed operas until today. Although the central storyline pales in comparison with operas of Puccini and Verdi. Its mesmerizing and dramatic lyricism, condensed storytelling, presentation of authentic Sicilian culture, and its focus on village life rather than the nobilities or mythological figures, all brought a fresh light into the opera world.
Symphony No. 9 in E-minor, “From the New World,” Op. 95 (1893)
Composed only three years after Cavalleria Rusticana, the Ninth Symphony of Antonín Dvořák carries a completely different tradition from symphonic composers such as Beethoven, Brahms, and Tchaikovsky. The work was composed when Dvořák was serving as the director of the National Conservatory of Music in New York City. It infuses Dvořák’s curiosity and excitement for America with his nostalgia for his homeland. Just like Cavalleria Rusticana, the work was an instant hit and became one of the most programmed symphonies. It became a standard work to represent the American style in the symphonic realm despite the fact its style is completely Czech from the first note to the last barline, except for the melody Dvořák borrows in the second movement from his student at the conservatory Harry Burleigh, played beautifully by our oboist and English horn player Joseph O’Leary.

Born in the historical city of Xi’an, China, conductor SHUN YAO has worked with orchestras across America, Europe and Eastern Asia. In the 2020–2021 season, he performed with Janacek Philharmonic in Ostrava, Czech Republic, under a special invitation from the Czech Ministry of Culture, and with the South Denmark Symphony Orchestra. In July, Yao served as assistant conductor for a production of Britten’s Albert Herring at Chicago Summer Opera.

A finalist at the Arthur Nikisch International Conducting Competition (2020), Yao has served as a conducting fellow with Divertimento Ensemble in Italy and Eastern Music Festival in North Carolina. He was the assistant conductor of Hear&Now Ensemble in Houston, leading premieres of instrumental works as well as music theater. While in Houston, he was also a core staff member (personel and operation manager and librarian) for the innovative conductorless orchestra Kinetic Ensemble during its early years.

Yao holds degrees from Cleveland Institute of Music, Rice University and Manhattan School of Music. He is currently a first year candidate for Doctorate in Musical Arts at the University of Maryland School of Music, while serving as the assistant conductor for Annapolis Symphony Academy.

This event will be performed in the Dekelboum Concert Hall.  If you are unable to join us in person, we invite you to watch the livestream here.