Dualities of Our Nature 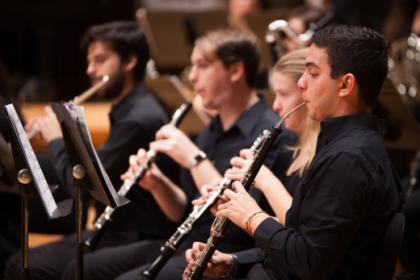 About the UMD Wind Ensemble (UMWE):

Under the direction of Andrea Brown, UMWE performs works from the most respected repertoire written for wind band and chamber ensembles with a focus on highlighting composers from underrepresented populations.

While we strongly encourage audience members to attend performances masked, it is no longer required. Please see our Health + Safety page for more information.

Melinda Wagner is an American composer who received degrees in composition from the University of Chicago and the University of Pennsylvania. Her Concerto for Flute, Strings, and Percussion premiered in May 1988 and was awarded the 1999 Pulitzer Prize in Music. Major works of hers include Concerto for Trombone for Joseph Alessi and the New York Philharmonic, Concerto for Piano and Orchestra: Extremity of Sky, which was commissioned by the Chicago Symphony for Emanuel Ax, and Little Moonhead, composed for the Orpheus Chamber Orchestra as part of its “New Brandenburgs” project.

Ms. Wagner has taught at the University of Pennsylvania, Swarthmore College, Syracuse University, and Hunter College. She is currently on the faculty at Juilliard.