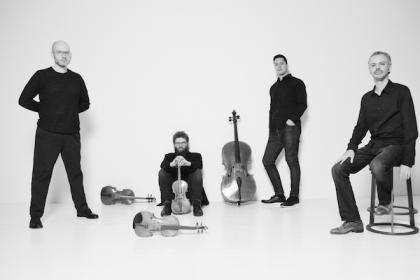 Did you miss the show?  The link to the digital broadcast will be available to stream until October 26. Call the ticket office for access! 301.405.ARTS

Lauded by NPR as “a string quartet of boundless imagination,” Brooklyn Rider has collaborated with the likes of banjo master Béla Fleck, Iranian virtuoso Kayhan Kalhor and Mexican jazz singer Magos Herrera. Brooklyn Rider finds inspiration in diverse musical languages ranging from Persian classical music to Beethoven to the various voices of living composers—including UMD School of Music student composers as part of a Composer Reading on campus. Committed to inclusive programming and deep artistic collaborations, the quartet has also performed in The Clarice’s sensory-friendly series for Prince George’s County children with autism and other disabilities. In 2021-22, Brooklyn Rider will continue working with School of Music students and appear as part of the school’s Renegade series, which features innovative and entrepreneurial artists of various disciplines.

For this event the audience is invited to experience the performance from a new vantage point.  Audience seating will be on the Dekelboum stage, on risers where the orchestra typically sits. The musicians will perform on the front of the stage, facing the audience.  Seating will be general admission.

With their gripping performance style and unquenchable appetite for musical adventure, Brooklyn Rider has carved a singular space in the world of string quartets over their 15-year history. Defining the string quartet as a medium with deep historic roots and endless possibility for invention, they find equal inspiration in musical languages ranging from late Beethoven to Persian classical music to American roots music to the endlessly varied voices of living composers. Claiming no allegiance to either end of the historical spectrum, Brooklyn Rider most comfortably operates within the long arc of the tradition, seeking to illuminate works of the past with fresh insight while coaxing the malleable genre into the future through an inclusive programming vision, deep-rooted collaborations with a wide range of global tradition bearers and the creation of thoughtful and relevant frames for commissioning projects.

The upcoming concert season is strongly illustrative of the intrepid musical appetite of Brooklyn Rider. This coming fall, they will premiere a major new work by the great Argentinian composer and close friend, Osvaldo Golijov. The quartet also has two new collaborative projects for 2021-22. One is with Israeli mandolin virtuoso Avi Avital, and the other is a brand new phase of work with tenor Nicholas Phan, where they will explore the music of Franz Schubert and Rufus Wainwright. Looking further into the future, they will expand work already underway with Syrian clarinetist Kinan Azmeh and will launch a major new commissioning venture for the 2022-23 season called The Four Elements; an exploration of the four classical elements (earth, air, water and fire) as metaphor for both the complex inner world of the string quartet and the current health of planet Earth.

Prior to the global pandemic, the 2019-20 season saw a veritable explosion of new projects and releases. Shared at the height of the US lockdown, the Grammy®-nominated recording Healing Modes (In A Circle Records) presented Beethoven’s towering Opus 132—the composer’s late testament on healing and the restorative power of new creation—interwoven with five new commissions powerfully exploring topics as wide-ranging as the US-Mexico border conflict, the Syrian refugee crisis, the mental health epidemic and physical well-being. Described by The New Yorker as a project which "...could not possibly be more relevant or necessary than it is currently," the composers include Reena Esmail, Gabriela Lena Frank, Matana Roberts, Caroline Shaw and Du Yun.

Earlier in the same season saw the release of two projects from vastly different musical spheres. One with the master Irish fiddler Martin Hayes (In A Circle Records), an album which the Irish Times described as “a masterclass in risk-taking,” and the other, Sun On Sand (Nonesuch Records), featuring the music of Patrick Zimmerli with saxophone giant Joshua Redman and fellow collaborators Scott Colley on bass and Satoshi Takeishi, percussion.

Brooklyn Rider has remained steadfast in their commitment to generate new music for string quartet at nearly every phase of their history. To kick off the 2017-18 season, Brooklyn Rider released Spontaneous Symbols (In a Circle Records), featuring new commissions by Tyondai Braxton, Evan Ziporyn, Paula Matthusen, Kyle Sanna and Colin Jacobsen. In the 2015-16 season, the group celebrated its 10th anniversary with the groundbreaking multi-disciplinary project The Brooklyn Rider Almanac, for which it recorded and toured 15 specially commissioned works by musicians from the worlds of folk, jazz and indie rock, each inspired by a different artistic muse. The Fiction Issue, with singer-songwriter Gabriel Kahane, featured his composition which was premiered in 2012 at Carnegie Hall by Kahane, Brooklyn Rider and Shara Nova. Additionally, Brooklyn Rider has enjoyed a long-standing relationship with the music of the iconic American composer Philip Glass, which began with 2011’s much-praised recording Brooklyn Rider Plays Philip Glass and continued with two subsequent installments of Glass’s works for string quartet, all released on the composer’s label Orange Mountain Music.

Numerous other collaborations have helped give rise to NPR Music’s observation that Brooklyn Rider is “recreating the 300-year-old form of string quartet as a vital and creative 21st-century ensemble.” During the 2016-17 season, Brooklyn Rider released an album entitled So Many Things on Naïve Records with Swedish mezzo-soprano Anne Sofie von Otter, comprising music by Colin Jacobsen, Caroline Shaw, John Adams, Nico Muhly, Björk, Sting, Kate Bush and Elvis Costello, among others. Some Of A Thousand Words, an evening-length program with choreographer Brian Brooks and former New York City Ballet prima ballerina Wendy Whelan, was an intimate series of duets and solos in which the quartet’s live onstage music is a dynamic and central creative component. Some Of A Thousand Words was featured at the 2016 Jacob’s Pillow Dance Festival, before two U.S. tours, including a week-long run at New York City’s Joyce Theater. A collaboration with Dance Heginbotham with music written by Colin Jacobsen resulted in Chalk And Soot, an evening-length work presented by Lincoln Center’s White Lights Festival in 2014. Brooklyn Rider has also frequently teamed up with banjoist Béla Fleck, with whom they appeared on two different albums, 2017’s Juno Concerto and 2013’s The Impostor. And in one of their longest-standing musical friendships to date, Brooklyn Rider and Iranian kamancheh player Kayhan Kalhor released the highly praised recording Silent City (World Village) in 2008, still touring the project to this day.

"Brooklyn Rider has redefined what it means to play chamber music with their gripping performances and innovative programming. The quartet’s profound exploration of healing elevates compositional voices that have been historically silenced and is the perfect balm as we continue to battle the global COVID-19 pandemic."

“Schisma is a reference to the phrase “in the cleft of the rock,” which appears in many scriptures including the Song of Solomon and Isaiah. In the Book of Exodus (33:22), there is a beautiful line which reads: “I will put you in a cleft of the rock, and I will cover you with my hand until I have passed by.” It is essentially a promise of safety, of a makeshift refuge within a crack in something as hard and unforgiving as mountain rock, until the danger has passed. It is a kind of nest, a home. I have always felt that Beethoven’s Heiliger Dankgesang (third movement of Opus 132) uses a nest-like architecture in a unique and profound way. The return of the dance-like Neue Kraft fühlend section always feels like a warm homecoming, a place of hope and shelter and deep comfort. The choice to title this piece with the modern Greek word schisma (a translation of the Hebrew נִקְרַת, or “cleft”) is a reference to the islands in today’s Greece which have become harsh refugee camps for Syrians seeking asylum from the war. It also points to the nature of war, of the break between peoples and of the search for hope and new growth within the breaks and crevices.”

“In my early thirties, after receiving a devastating diagnosis of a life-threatening autoimmune disease, I paradoxically entered the most uniquely creative period of my life. Looking back, I believe I might have been grasping at what was most life-affirming to me, terrified of impending surgeries, radiation, drugs and pain. Over several months, I composed hours of chamber music, wrote bilingual poetry and a fantasy novel of time-travel back to my ancestral homeland of pre-Conquest Perú, knitted and sewed, mastered the tarot and intricate origami, dove into the alchemy of homemade soaps and face creams, interned in bee-keeping, cultivated sourdoughs and learned to make cheese.

“This was quite the prelude, bright and desperate both, to several years of treatment when most of my creative endeavors were muted. Now, a number of years later, scarred but healthy and working actively as a composer, I still carry around melodies born from that time; and in 2017, fashioned a quartet from this oddly luminescent wellspring into the first movement of Walkabout: Concerto for Orchestra, somewhat simplified for its symphonic weight. When I was approached by the brilliant string quartet Brooklyn Rider for a work on the theme of healing, I found my chance to hear these ideas for the nimbler string quartet, my original conception. The result is Kanto Kechua No. 2 ("Quechua Song" with Quechua being the dominant language of post-Inca Perú) now with all of its ornamental intricacies and string-crossing whirls under an achingly high if brief violin line. Throughout, motifs from native Andean folk music proliferate.

“I’m exceedingly grateful to be able to, at long last, bring this music to life as I step now in wellness and creative abundance.”

“In September 2018, I developed an infection in my throat that wouldn’t subside. For two weeks, it became increasingly difficult to swallow, to breathe and especially to speak. During this time of intense, painful silence, I thought about what this loss of voice represented for me. Of how many times in my life I had been rendered voiceless—either by others or by my own doing. Healing, in this case, was not about enduring the pain, but about releasing the poison I have always swallowed—that didn't belong to me. It was only when I felt myself begin to release that poisonous energy that I felt the physical infection begin to subside.

“This piece was conceived during those dark weeks, and is simply about that release. It uses two incredibly beautiful Hindustani raags: the dark and mysterious Todi and the mournful Bhimpalas. While working on this piece, I was also working on a setting of a beautiful Hafiz poem which ends “When the violin can forgive / every hurt caused by others / the heart starts singing.” That is very much the spirit of this piece, too.”