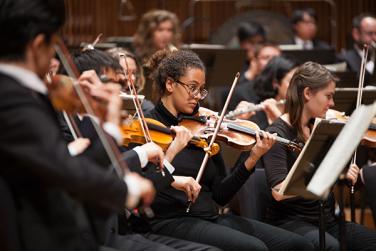 Throughout history, war has had a profound influence on classical music. Featuring cellist Frances Borowsky, runner up of the 2018-19 UMD Symphony Orchestra Concerto Competition, this concert will cover pieces from three different wartime periods:

In Memoriam: The Colored Soldiers Who Died for Democracy was written by William Grant Still, known for giving voice to African-American classical music in the first half of the 20th century, in January of 1944, at the height of the Second World War.

Tchaikovsky's popular 1812 Overture was commissioned in 1880 to celebrate the victory over Napoleon at Borodino, September 12, 1812, during the French Invasion of Russia.

Elgar's elegiac, autumnal and popular Cello Concerto was written in the summer of 1919, in Sussex, England, just months after Elgar had heard the sounds of artillery at the end of the First World War across the English Channel.

Led by Jesse Leong and Yu Wang of the graduate conducting studio, the UMD Repertoire Orchestra is a unique orchestra of musicians from across the campus that performs four full concerts each season. Repertoire varies based on instrumentation and consists of works for both chamber and full orchestra.